Sean FitzPatrick, the former chairman of Anglo Irish Bank, makes no comment as he leaves court after he was acquitted of all charges against him. Video: Colm Keena

Responding to a question from Fianna Fáil leader Micheál Martin, the Taoiseach has criticised the ODCE for their handling of the Sean FitzPatrick case 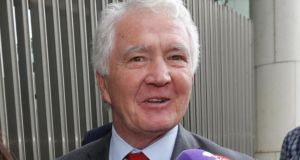 Seán FitzPatrick: A judge has ruled that a State agency tried to “build or construct” a criminal case against the former Anglo chairman. Will he sue? Photograph: Collins Courts

The acquittal of Seán FitzPatrick this week because the case against him involved a “biased” and “partisan” investigation conducted by the Office of the Director of Corporate Enforcement (ODCE), has raised questions not just for that agency but for others connected with the affair.

Judge John Aylmer found that, instead of conducting a fair investigation which looked for evidence of innocence as well as guilt, the ODCE sought to built a case against the former Anglo Irish Bank chairman.

The development raises serious questions for a number of State agencies, two firms, and FitzPatrick himself . . .

– Did the department in any way, even inadvertently, put pressure on the ODCE, which reports to it, to “build a case” against FitzPatrick?

– Did the department fail to ensure that the ODCE was adequately resourced for the work it was being expected to do in the wake of the banking collapse?

Office of the Director of Corporate Enforcement

– How did an agency with the power to conduct criminal investigations come to run an inquiry that was “biased” and “partisan” to such an extent that the judge had to instruct the jury to acquit FitzPatrick?

– Why did the agency not seek more resources when it found itself under so much pressure investigating suspected offences in the wake of the banking collapse, and in particular when it had been told to seek more resources if it felt they were needed?

– How did the agency allow such a high-level inquiry as the FitzPatrick one be headed by a staff solicitor who had never been involved in a serious criminal investigation before?

– Should the director, Ian Drennan, who was appointed in 2012 and replaced Paul Appleby, resign?

– Why did the Director of Public Prosecutions not spot the flaws in how the ODCE was going about investigating the suspected offences of FitzPatrick?

– When the office became aware of the flaws, what factors did it take into account when deciding to continue with the case against FitzPatrick?

– Why, after the collapse of the first trial in 2015, when it had become clear that there were serious flaws with how the FitzPatrick inquiry had been conducted, and it was known that the ODCE official in charge of the investigation had shredded documents relevant to the inquiry, was it decided to try and run a new trial?

– Should the DPP make a public statement on the matter?

– Given that there were trained Garda officers seconded to the ODCE, how come they didn’t point out more forcefully within the agency that it was making serious mistakes in how it was conducting the inquiry into the allegations against FitzPatrick?

– Why, after the 2015 trial collapsed, when it became known that ODCE solicitor Kevin O’Connell, during what he described as panic attack, had shredded documents relevant to the inquiry, did the Garda not commence a criminal inquiry into what on the face of it appeared to be an offence?

– Would the two EY audit partners who worked on the Anglo Irish Bank books during the 2002-2007 period have given voluntary statements, without legal representation, to the ODCE if they had been asked?

O’Connell, who led the investigation, said in evidence that he found it difficult to accept the sworn evidence of the two partners that they would have done so if asked.

– O’Connell also said that it was the experience of the ODCE that major financial services firms adopted a minimalist approach when co-operating with inquiries into suspected offences by their clients. Is this true?

– The fundamental error made by the ODCE was the way it went about taking witness statements from the two EY audit partners. Instead of Garda officers taking statements from the two auditors, O’Connell worked with EY’s legal advisers, A&L Goodbody, and statements, according to Judge Aylmer, were prepared that were “drafted for them in their entirety by others, they being solicitors with A&L Goodbody, a barrister instructed by them,” and input from the ODCE. The net result was a process more akin to the preparation of affidavits for a civil case than the taking of witness statements for a criminal trial. Did anyone in A&L Goodbody notice this at the time as problematic?

– A judge has now ruled that a State agency tried to “build or construct” a criminal case against FitzPatrick. The ODCE operated in a biased and partisan manner when conducting a criminal inquiry. Does FitzPatrick have grounds for suing the State?