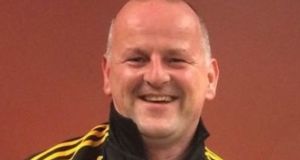 Seán Cox (53), from Co Meath, suffered a severe, traumatic brain injury in the attack outside Anfield.

An Italian man who was cleared of inflicting grievous bodily harm on Irish Liverpool supporter Seán Cox has been jailed for three years for violent disorder.

Filippo Lombardi (21) from Rome, was found not guilty at Preston Crown Court on Thursday of the assault on Mr Cox, who suffered “catastrophic injuries” when he was attacked on Walton Breck Road before the Champions League semi-final on April 24th.

The jury of six men and six women took just under nine hours to reach a verdict.

Lombardi, who had an Italian interpreter with him in the dock – but gave most of his evidence in English, had admitted a charge of violent disorder before the trial.

The student was one of a group of about 30 Roma supporters who made their way down Venmore Street on to Walton Breck Road, outside the stadium, just after 7pm.

Lombardi was seen on footage swinging a belt as another man, referred to as N40, punched Mr Cox, causing him to fall to the ground.

Recorder of Preston judge Mark Brown said Lombardi’s sentence would have been considerably longer if he had been convicted of the attack on Mr Cox.

But, he said: “Nonetheless, it is a feature of the case that during the violent disorder he was severely injured and that cannot be ignored.

“The violent disorder did not end with the attack on him because as he was lying unconscious on the ground it carried on regardless near to him and you, as is clear from the footage, were in the thick of it.”

The court has heard Mr Cox, from Dunboyne, Co Meath suffered a severe traumatic brain injury in the attack and is still being treated in a rehabilitation centre.

Alison Gurden, defending, said Lombardi was of previously good character and had played as a goalkeeper in the AS Roma academy between the ages of 13 and 16.

She said: “Mr Lombardi has a background of someone who, since he was a young man, has been very responsible and very hard working.”

She said he had had a “huge maturity increase” after spending nearly six months in prison.

The judge said he did not accept that Lombardi had not been there to cause trouble.

He said: “There is no doubt in my mind that your purpose was to cause a violent clash with the Liverpool fans and that’s demonstrated vividly in film footage.

“The footage shows that you had an active role and your assertion in evidence and in your basis of plea that you were just looking for signs for away supporter sections and were suddenly confronted by Liverpool fans is, in my judgment, nonsense.”

He said footage showed Lombardi using his belt “as a whip”.

He said: “Your actions and those of the other Roma supporters in the group are likely to have scarred the good name of football.

“In my judgment, you have brought disgrace on AS Roma supporters.”

He added: “The game will probably be remembered not because of the football skill on the field or the result, but because of the awful tragedy Mr Cox endured and the violent disorder that took place outside the ground.”

The court heard another man had been arrested in Rome in connection with the attack and was awaiting extradition.

The judge praised Mr Cox’s family, including his wife Martina, who had been in court for much of the trial and said they had acted with the “greatest of dignity and respect”.

There was no visible reaction from the public gallery, where three members of Lombardi’s family were also sitting, when the verdict was announced. – PA