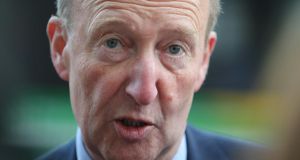 Shane Ross: “Judges should not attend political events. Justice Séamus Woulfe is not a member of the Oireachtas. The Oireachtas event should never have taken place.” File photograph: Nick Bradshaw

Mr Ross said that no Supreme Court judge should have been at the Oireachtas Golf Society outing in Clifden, Co Galway where Mr Justice Woulfe was one of more than 80 guests who attended a dinner that did not observe public health guidelines to stem the spread of Covid-19.

“Judges should not attend political events. Justice Séamus Woulfe is not a member of the Oireachtas. The Oireachtas event should never have taken place,” he told The Irish Times.

The two men served together in the last government from 2017 until June, with Mr Ross serving as minister for transport and Mr Woulfe as attorney general.

The Supreme Court judge, who was appointed a month ago after serving as attorney general in the last government, is under pressure over his attendance at the event in a Connemara hotel.

Mr Justice Woulfe has said he attended the dinner on the understanding that it would be adhering to public health guidelines and apologised for any unintentional breach of them.

“By clinging on to his office, Séamus Woulfe is sending all the wrong signals to those of us wishing to reform the judiciary. He should step down,” Mr Ross said.

The former Independent minister said that different standards of accountability were being applied to politicians and judges.

Mr Ross noted that Fianna Fáil TD Dara Calleary stood down as minister for agriculture and other elected representatives had resigned positions and “paid similar penalties”.

“Are Supreme Court judges to be set a lower bar than politicians on the issue? The resistance to resignation shown by Justice Woulfe underlines all that is wrong with the judiciary,” he said.

Mr Ross tried unsuccessfully to pass legislation during his time in government restricting the role of politicians and the judiciary in the appointment of judges. Mr Woulfe described his Bill as a “dog’s dinner” at an event in 2018, airing Cabinet tensions in public over the minister’s attempt to overhaul judicial appointments.

The former TD described the resistance by leading party politicians to calling for the judge’s resignation by “pleading the separation of powers” between the Oireachtas and the judiciary as “cowardly.”

Taoiseach and Fianna Fáil leader Micheál Martin, Tánaiste and Fine Gael leader Leo Varadkar and other Cabinet members have not criticised the judge, claiming that the separation of powers precluded them from commenting on the behaviour of judges.

“There was no separation of powers a few weeks ago when the politicians in this new Cabinet, including Taoiseach Micheál Martin, eagerly nominated him,” said Mr Ross.

“Are judges to remain untouchable, unaccountable and apparently infallible? No wonder they refuse to declare their financial interests or to allow lay people to chair their elitist method of appointments, preferring to keep the selection procedure to an inner circle of politicians and judges.”