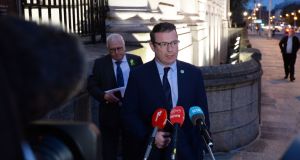 Speaking as he left the building, Labour leader Alan Kelly said the outcome of the meeting had been inconclusive and Opposition leaders would need to get their own advice. He said another meeting would be required early next week.

It is understood the Taoiseach gave an undertaking to gather all the relevant documentation surrounding the episode including all the correspondence between Mr Justice Woulfe and Chief Justice Frank Clarke, who told the former attorney general he was of the opinion he should resign from the Supreme Court arising his attendance at a golf dinner in Clifden during the summer, and the manner in which he dealt with it afterwards.

“We have only got partial disclosure and partial documentation from Justice Woulfe and Chief Justice Clarke. We want the full documentation. That request was broadly acceptable to the Taoiseach,” said Mr Kelly.

He also said that impeachment under Article 35.4 of the Constitution was one of only several options that was raised at the meeting. He said the decision to be taken was not a binary one for the Oireachtas of impeachment or nothing. He added that doing nothing was also an option.

The four Opposition leaders who spoke leaving the meeting were Mr Kelly, Social Democrats co-leader Catherine Murphy, Richard Boyd-Barrett of Solidarity-People Before Profit and Mattie McGrath of the Rural Independents. There was agreement between all four that the three Government leaders had been very cautious in their approach to the meeting and had not pushed any particular standpoint, view or possible solution.

Ms Murphy said it was obvious that the Oireachtas needs its own independent legal advice.

She said the leaders “didn’t get a resolution today”.

Mr Boyd-Barrett said there definitely was not a consensus about what to do next.

“I think there’s a concern about what exactly are the legalities of the Dáil taking action, or passing motions, or commencing impeachments.

He said it continued to be his view that Mr Justice Woulfe should step back and resign.

He said it was a “distraction” which was going undermine public health efforts and had already caused “a general legal, political and constitutional mess”.

Mr McGrath of the rural alliance brought up the issue of the Judicial Appointments Advisory Board appointment of Mr Woulfe and said he asked Mr Martin did he know that other judges had expressed interest in applying. He said he though it “bizarre” that Mr Justice Clarke was chair of the board which recommended Mr Woulfe as the new judge.

He also said it remained his view that Mr Woulfe had not reached the threshold of misbehaviour to trigger an impeachment motion.

On Friday morning, The Irish Times reported that a number of senior judges wrote to the Government to express interest in the Supreme Court vacancy that was ultimately filled by Mr Woulfe, but the Cabinet was not told of their applications before he was selected in July.

Sinn Féin president Mary Lou McDonald said: “There are serious questions surrounding the appointment process of Mr Justice Séamus Woulfe and the fact that the Cabinet was not informed that there were three judicial candidates who had also asked to be considered for the post. Those questions need to be answered by government.

“Arising from today’s meeting, it is not yet clear that the Oireachtas has a role in finding a resolution to the present situation concerning Mr Justice Woulfe and his colleagues.”