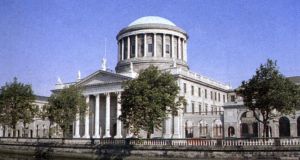 The court heard RTÉ told the Government proposed advertising slogans for the referendum were political.

RTÉ told the Department of Children and Youth Affairs a month before the Children Referendum that slogans in the Government’s proposed ads for the referendum were political and breached the Broadcasting Act, the High Court has heard.

Those slogans, including “protecting children” were removed from the tv and radio ads before they were broadcast but the Department was advised by the Attorney General they could stay on the Department’s website and in a booklet distributed ten days later to two million homes, Elizabeth Canavan, assistant secretary general of the Department, said.

The Department was advised using the slogans in the booklet and website did not breach the McKenna principles (which prevent the spending of public monies on a partisan information campaign in a referendum), she said.

The booklet was seen by Minister for Children Frances Fitzgerald and various advisers before being cleared for publication.

Ms Canavan agreed the Supreme Court had ruled, two days before the November 10th 2012 referendum, the booklet and website were not neutral and the Government spend of €1.1 million public monies on a partisan campaign was unlawful.

There was no delibeate strategy to devise a partisan campaign, that was accidental, she said.

She agreed the Minister had brought the referendum proposal to Government. The Minister was entitled to advocate “in her own right” but the Minister and Department were very conscious of the need to observe the McKenna principles, she said.

The Department’s concern throughout the campaign was to ensure people had sufficient information to make an “informed” choice. The Department knew the matter was complex, was concerned about a possible low turnout and had not engaged in advocacy, she said.

Ms Canavan was being cross-examined today by Paul Sreenan SC, for Co Dublin mother of five Joanna Jordan, in the continuing hearing of proceedings by Ms Jordan aimed at overturning the referendum result.

The amendment was passed by 52 to 48 per cent based on a 33.49 per cent turnout and Ms Jordan claims the Government information materially affected the outcome.

In affidavits to the court, Ms Canavan said the main political parties and the Yes for Children coalition, a partnership of various children’s welfare and rights groups, had supported a Yes vote via campaigns and advertising while a broad base of civil society also supported the proposal. Fine Gael spent €150,000 and Labour €50,000 on their campaigns.

The No camapign was less extensive and appeared to have little presence in the paid media but had equal access to broadcast news and current affairs coverage of the campaign.

The personalities on the No side “attracted extensive coverage”, for example in the Alive newspaper with a stated monthly distribution of 240,000 copies.

The deployment of the Department’s material had to be seen in the wider context of the range of information and communication efforts ongoing during the referendum campaign, she said. The Referendum Commission was allocated €1.9m funding and was an important source of information.

In evidence, she agreed the commission’s role was to provide neutral informaton.

The Government decided it too would provide information as there was a view the Commission would be very focused on the wording and would take “a narrower lens”.

It was felt the Commission would not cover issues like childcare proceedings and adoption law.

The Department had not considered including in its booklet the view there was no need for a referendum. As a brand new Department, it had engaged a number of agencies to assist it in ensuring people had enough information to understand the issues, she added.