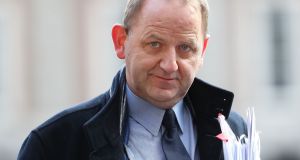 RTÉ has said it was not briefed by then Garda commissioner Noirin O’Sullivan and Garda headquarters for reports about Sgt Maurice McCabe in which he was “branded a liar”.

The Charleton Tribunal is investigating whether Garda HQ operated a smear campaign against Sgt McCabe.

One of the tribunal’s terms of reference asks it to investigate whether the then Garda commissioner, using briefing material prepared in Garda HQ, influenced or attempted to influence broadcasts on May 9th, 2016 purporting to be a leaked account of the then unpublished O’Higgins Commission report in which Sgt McCabe was branded “a liar and irresponsible”.

During Sgt McCabe’s second day of evidence, Sean Gillane SC for RTÉ, was asked by the tribunal chairman Mr Justice Peter Charleton about his client’s response to the term of reference.

Sgt McCabe told the tribunal it was still his view that if he had not produced a secret tape recording of a meeting he had with Supt Noel Cunningham in Mullingar in 2008, during the proceedings of the O’Higgins Commission in 2015, a false allegation against him might not have been exposed at the confidential hearings.

Mr Murphy said that at the same time a submission was made by Ms O’Sullivan’s legal team to the commission containing a false allegation against Sgt McCabe concerning what had happened at the Mullingar meeting, a report of the meeting was also handed in which showed that the submission was incorrect.

Sgt McCabe said he rejected that. He could not agree “at all” with counsel’s suggestion that the commission had the correct version of events and would have resolved the matter without the tape.

Sgt McCabe said that on the day the submission making the false allegation was handed in, he retrieved an old mobile phone from his attic containing the secret recording, which he later produced to the tribunal.

“It’s in my heart that I think that if I hadn’t got a recording of the Mullingar meeting, it would have been very serious for me.”

When counsel said that was his subjective view, Sgt McCabe agreed it was.

Michael McDowell SC, for Sgt McCabe, said it was not true to say that the tape had been immaterial.

Sgt McCabe said the submission had been reviewed by Supt Cunningham, who had attended the Mullingar meeting and drafted the report, prior to it being given to the commission.

Mr Murphy said mistakes can be made and that in his evidence Sgt McCabe had accepted that his statement to the tribunal had contained an error. Sgt McCabe said it was an issue for the chairman.

Sgt McCabe was being questioned about a term of reference which asks if unjustified grounds were inappropriately relied upon by Ms O’Sullivan to discredit him at the O’Higgins Commission.

“You have to see it from where I am coming from,” he said.

The submission containing the false allegation was handed in on behalf of the then commissioner, he said. “They were instructed to make sure it was accurate. They signed off on it,” Sgt McCabe said.

Mr Murphy said that Sgt McCabe had signed off on his statement to the tribunal, which contained an inaccurate claim about shouting during the confidential hearings of the commission.

That in turn had prompted the tribunal to circulate audio files from the hearing.

Sgt McCabe said he had apologised for that error. He said he was of the belief that if he had not had the secret recording, he would have been in trouble.

Mr Murphy put it to the witness that there were “occasions when some of your views were not supported by evidence.”

Sgt McCabe agreed but added “there were a number of incidents I was blamed for and that was in the wrong as well.”

The tribunal heard that Sgt McCabe ceased full-time working in May or June 2016 despite being encouraged to return to work. The inaccurate submission to the commission made by Ms O’Sullivan’s legal team was part of his reason for this, he said.

He said it was not the case that he was staying out of work on legal advice. He said the idea of his returning to work when Ms O’Sullivan was commissioner “was an issue”.

Mr Murphy said it was Sgt McCabe’s decision not to return to work.

Sgt McCabe said he “felt it was awkward and I was unable to.”

The tribunal heard that in 2009, Sgt McCabe lodged proceedings that are still before the High Court involving allegations concerned with matters alleged to have occurred in the Cavan-Monaghan division during his time as sergeant-in-charge at Bailieborough Garda station.