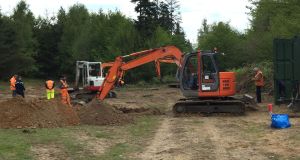 A search operation in recent days in a forest in France for the body of Seamus Ruddy, one of Northern Ireland’s Disappeared. Photograph: Independent Commission for the Location of Victims’ Remains/PA Wire

The remains located near Rouen in France on Saturday have been formally confirmed as those of Séamus Ruddy, one of the Disappeared who was murdered in 1985.

The Independent Commission for the Location of Victims’ Remains (ICLVR) announced on Wednesday that the French authorities have completed the DNA profiling of the remains recovered from the forest at Pont-de-l’Arche , and confirmed them as those of Mr Ruddy.

The confirmation clears the way for the body to be brought back to Northern Ireland for interment in the Ruddy family grave at Monk’s Hill cemetery in Newry.

There are, however, still some bureaucratic matters to be dealt with before the body is released. A spokesman for the commission said the remains will be “repatriated in due course”.

Mr Ruddy (33), a former member of the Irish National Liberation Army’s political wing, the Irish Republican Socialist Party, was teaching in a private school in Paris when he was killed in a dispute understood to have been linked to INLA arms smuggling.

He will be buried with his parents, Molly and John, in Newry. His name already is inscribed on the family headstone.

Tánaiste and Minister for Justice and Equality Frances Fitzgerald said on Wednesday that “our thoughts today are with Séamus Ruddy’s family. While I know that this news will be bring mixed emotions for them, I hope the confirmation of the discovery of his remains will provide some comfort to his family after such a long period of suffering for them.

“I want to thank the Commission for the Location of Victims’ Remains for their tireless, ongoing work on behalf of the families of the Disappeared. That work will continue to have our full support with the aim of ensuring that the remains of the other victims will be located. Anybody with any information that can assist in that task should bring it forward without delay.”

Of the 17 Disappeared, there are now three remaining bodies to be discovered: those of IRA victims, Columba McVeigh from Donaghmore in Co Tyrone, who went missing in 1975; Joe Lynskey, who went missing from Belfast in 1972; and British soldier Capt Robert Nairac, who was shot dead close to the Border in the Louth/south Armagh area in 1977.