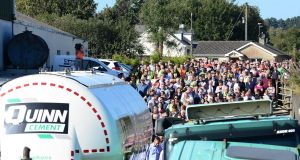 Hundreds gather at the Quinn company headquarters in Derrylin to show their support for Kevin Lunney. Photograph: Arthur Allison/Pacemaker Press

Workers at Quinn Industrial Holdings (QIH) in Derrylin, Co Fermanagh, have demanded an end to the “reign of terror” waged against the company’s management following a brutal attack this week on a top executive.

Meanwhile, the Minister for Justice Charlie Flanagan sought a major escalation in An Garda Síochána’s investigation into the intimidation suffered by the company and its executives since 2011.

During a rally in Derrylin yesterday, workers called on the Garda and the PSNI to deploy “whatever resources are necessary” to bring the perpetrators to justice.

About 500 people, the majority of them staff at QIH, gathered at the company’s headquarters on Friday afternoon to express their “unequivocal support” for the savagely attacked executive Kevin Lunney.

Saying that she had come “to stand in solidarity”, Democratic Unionist Party leader Arlene Foster said a message must be sent out that the attackers would be “brought to justice”.

She was joined by Michelle Gildernew, Sinn Féin MP for Fermanagh-South Tyrone, and by Brendan Smith, a Cavan-Monaghan TD and former Fianna Fáil minister.

Reading a statement on behalf of the staff, Stephen Kelly, the chief executive of Manufacturing NI said: “We utterly condemn this and all previous physical assaults, arson attacks and intimidation on members of staff.

“Stop this campaign. The people who are perpetrating these acts do not represent us or our views, and we plead with them to stop this campaign with immediate effect,” he added.

A petition declaring these sentiments signed by all 800 members of staff was presented as a gesture of support to members of Mr Lunney’s family, who had come to the rally.

Statements of solidarity were also read out from the Fermanagh Trust, where Mr Lunney was a trustee, from the board of Manufacturing NI, the Mineral Products Association and the Irish Concrete Association.

Mr Lunney remains in hospital after Tuesday’s attack. Some of his fingernails were pulled out, his face and neck slashed with a Stanley knife and his leg badly broken during the two-hour ordeal.

Fr Gerry Comiskey, the parish priest in Drumlane, Co Cavan, said he had been to see Mr Lunney and that he was “deeply traumatised” but was “recovering good”.

Gardaí yesterday carried out searches across Cavan. No arrests were made, however. Extra gardaí, including armed officers, have been deployed by Garda Commissioner Drew Harris.

Three teams of Armed Support Unit gardaí and their high-profile Audi Quattro vehicles – deployed recently in Dublin to clamp down on the Kinahan-Hutch feud – are now on Border duty.

Highlighting the scale of the inquiry to catch the attackers, who number up to a dozen, Garda Deputy Commissioner John Twomey travelled to Co Cavan to address gardaí.

“It was an outrageous attack and something that we won’t tolerate,” he said. “We will be taking every action that we need to bring the perpetrators of this terrible act to justice.

He said the Garda first wanted to reassure locals, and that Chief Superintendent John O’Reilly would have “the whole resources of the organisation” to bring the attackers to heel: “There will be no stone left unturned.”

Both Garda and the PSNI have asked anyone who saw a black Audi saloon being driven in the Derrylin area of Co Fermanagh or the Swanlinbar or Killeshandra areas of Co Cavan to make contact.

Security at QIH premises is being urgently reviewed, said company director John McCartin: “These are attacks on their jobs and their wellbeing, so those are at risk and people are fearful about that.”

Keeping well at work from the comfort of your home 09:24
‘The stakes are undoubtedly higher’ 08:50
Graduate programmes: embracing informal learning 08:48
TD calls for banning the wearing of paramilitary uniforms by dissidents 07:56
Producing the golden eggs of the bioeconomy 06:00