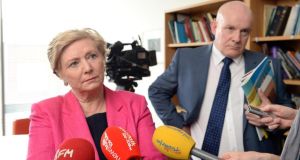 Minister for Justice Frances Fitzgerald has commissioned a review of the drugs and alcohol treatment services available to criminal offenders and people on probation.

Speaking at an event to mark the publication of the annual reports of the Irish Prison Service and the Probation Service, Ms Fitzgerald said one of the factors which contributed to offending behaviour was the misuse of drugs and alcohol.

A survey published by the Probation Service in 2012 had found the number of adult offenders on probation supervision who had ever misused drugs and/or alcohol was very high - at 89 per cent.

“We know too well of the devastating impact of the misuse and abuse of alcohol and drugs,” Ms Fitzgerald said.

The review she had commissioned would “set out a pathway for the provision of improved alcohol and addiction services for offenders which will facilitate improved outcomes for them”, she added.

Consultation with the HSE, which is the main funder for drug and alcohol services, will form part of the review.

There were 900 fewer prisoners in jails today than in February 2011. Last year there were some 16,155 committals to prison compared with 15,735 in 2013. The increase is attributed to an 8 per cent rise in the number of people committed on sentences of less than three months, specifically for the non-payment of fines.

Ms Fitzgerald said she planned to eliminate, insofar as was possible, the option of imprisonment as a sanction for non-payment of fines. This would be achieved through implementation of the Fines (Payments and Recovery) Act.

The second joint service strategy of the Probation Service and the Irish Prison Service was also published and covers the period from 2015 to 2017.

Jesuit Centre for Faith and Justice

That document had made a commitment to introduce appropriate assessment procedures for prisoners on their committal to prison.

Advocacy officer Eoin Carroll said the centre had previously argued that this needed to include a formal cell-sharing risk assessment which had not been completed.

Irish Prison Service director general Michael Donnellan said the incident in which a prisoner had been stabbed to death in Cork on Sunday was fortunately “very rare”.

The last time such an incident had occurred was almost eight years ago.