Police submit report on death of Karen Buckley to prosecutors 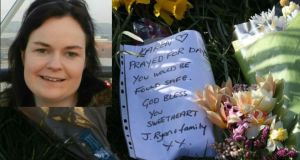 Ms Buckley’s disappearance and death continues to dominate media reports in Scotland with many Glaswegians expressing both sadness and anger that she should die in their city.

The Crown Office in Glasgow has confirmed it has received a report from the police into the death of Irish student Karen Buckley who went missing while out socialising last weekend.

A spokesman for the Crown Office issued a statement in relation to the case which saw a 21 year old man arrested on Thursday morning by police investigating Ms Buckley’s disappearance and death.

It is understood the 21 year old man will be brought before Glasgow Sheriff’s Court at Carlton Place near the city centre after 2pm on Friday.

Police forensic investigators in Scotland are on Friday were examining a knife recovered from a canal near where Ms Buckley was last seen.

The knife was removed in an evidence bag and handed over to scientists at Glasgow’s crime laboratory who are investigating if it is linked to the death of the 24 year old student.

Her body was found on High Craighton Farm 13kms north of Glasgow. She went missing while out socialising last weekend.

A postmortem was carried out on Ms Buckley’s body at a Glasgow hospital yesterday but police have not disclosed its results or given any indication as to how Ms Buckley was killed.

However, it is believed to add significantly to their investigation.

A vigil will be held in George Square in Glasgow city centre at 5pm to show support for the family and friends of the student.

People are being encouraged to bring flowers and candles to the event, which is being organised by former Scottish Socialist politician Rosie Kane.

Writing on Facebook she said: “If folk can come to George Square tomorrow at 5pm we could embrace each other in Karen’s honour and hope that those hurt by loss and fear and trauma will know we care.”

On Friday police forensic investigators are continuing to examine a silver car belonging to the 21-year-old man who is in custody.

Details about the seizure of the car are only just emerging but it appears that the car was removed late last Monday night from Dorchester Avenue in Kelvindale where the man has a flat.

The vehicle has been taken to a secure location police are understood are examining it for any evidence that it linked to Ms Buckley disappearance and death.

Her body was found at the hillside farm by police search teams on Wednesday night and yesterday Det Supt Jim Kerr confirmed that the body was that of the missing Corkwoman.

Police search teams including sniffer dog units are continuing on Friday to search the farm which is located just off the Stockiemuir Road which is one of the main tourist routes to Loch Lomond north of Glasgow.

A large area around the farmhouse and surrounding outhouses remains sealed off by police and police are also continuing with door to door inquiries in the area where houses are quite dispersed.

Ms Buckley’s disappearance and death continues to dominate media reports in Scotland with many Glaswegians expressing both sadness and anger that she should die in their city.

One floral tribute left at the entrance to High Craighton Farm summed up the mood of many Glaswegians who have expressed sympathy for Ms Buckley’s grieving family.

It offered an apology that Ms Buckley should die in a city to which she only moved in January to study occupational therapy at Glasgow Caledonian University.

“I honestly don’t understand what is wrong with this world. I’m so sorry this happened to you in Glasgow. Rest in peace, beautiful angel,” read the card attached to the bouquet.

Ms Buckley’s parents John and Marian on Thursday told of their devastation at the loss of their only daughter.

Mr Buckley and his wife, Marian, had travelled from their home in Mourneabbey in north Cork to Glasgow on Monday morning after they learned that their daughter had failed to return from a night out with friends in the Scottish city on Saturday.

“Marian and I, together with our sons Brendan, Kieran and Damian, are absolutely heartbroken,” said Mr Buckley in a statement which was read on his behalf at a press briefing by Det Supt Jim Kerr of the major investigations team in Glasgow.

“Karen was our only daughter, cherished by our family and loved by her friends. She was an outgoing girl, who travelled the world where she met lots of people and thoroughly enjoyed her life. We will miss her terribly.

“We would be very grateful if we could be left alone now to grieve with our family and friends,” said Mr Buckley.