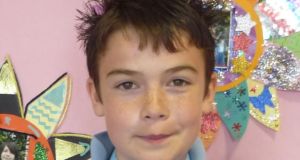 Oisín McGrath who died after an incident at his school. Photograph: Pacemaker

Police investigating the death of Oisín McGrath (13) from Belcoo, Co Fermanagh suspect that a row over a football was the trigger for the incident that led to his fatal injuries, according to informed sources.

Oisín died last week following injuries he suffered on the previous Monday during an incident in the playground of St Michael’s school in Enniskillen where he was a pupil.

A 17-year-old male, a senior pupil at the school, was arrested last week and then released on bail. He was rearrested on Tuesday, interviewed by PSNI detectives and released again on bail.

It is understood the teenager has denied being directly involved in the incident that resulted in Oisín suffering his fatal injuries.

Sources have discounted some reports that Oisín died as a result of injuries he sustained after he was struck by a bottle thrown at him by a senior boy in the playground of the school.

“The incident happened while senior boys in the school were playing football in an area which has a sort of ‘cage’ around it to prevent balls being lost,” said one source.

He characterised the incident as a not untypical happening in any school playground, except that it had tragic consequences.

“One of the boys kicked the ball over the fence and younger boys grabbed the ball and ran away with it. They were chased by some of the senior boys and that’s when it is believed that Oisín was injured,” he said.

“It seems he suffered his injuries when he was hit by one of the chasing boys. From what we heard it wasn’t so much a direct blow as a ‘whack’. Certainly nobody threw a bottle at Oisín.”

The teenager’s organs were donated to assist five people.

Meanwhile, journalist Rodney Edwards of the Impartial Reporter in Enniskillen reported that hours after Oisín was buried on Monday his parents Nigel and Sharon McGrath were welcomed into Magheracross parish Church of Ireland church in Ballinamallard, Co Fermanagh to celebrate football, friendship and faith in a service entitled Walk Alone? Never!

Ulster Unionist MLA Tom Elliott, a member of Magheracross parish church, sat alongside GAA members during the service and afterwards paid tribute to the McGrath family.

Woman who took legal challenge in hotel quarantine released after negative Covid test 11:07
Teenage girl (18) jailed for a year for her role in petrol bomb attack 11:05
Covid-19 vaccine registration system to open for 65-69 year olds tomorrow 10:32
Covid-19 Vaccine Tracker: What's available in the Republic of Ireland and what else is coming? 10:32
Mandatory vaccination of healthcare workers would be ‘most intrusive step’ - regulator 10:28