Photographs of gardaí in hoods ‘do not inspire confidence’ 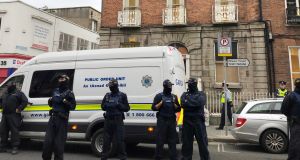 Gardaí from the public order unit attending the scene when a housing crisis protest was brought to an end in Dublin’s north inner city on Wednesday. Photograph: Jack Power

Photos of gardaí wearing hoods as men in balaclavas executed a court order for a landlord did not “inspire public confidence” in the force, the head of the Policing Authority has said.

Josephine Feehily said she was pleased Garda Commissioner Drew Harris had made a statement on the matter, which relates to the handling of a housing crisis protest being brought to an end at a vacant building in Dublin’s north inner city.

She and her colleagues in the Policing Authority would pursue the issue further with Mr Harris.

In his first major comment on a policing operation since taking up the post, Mr Harris commended gardaí for their restraint in the face of physical, verbal and racial abuse at the policing operation but conceded the use of “hoods” by some gardaí “was not correct”.

Ms Feehily said the enforcement of court orders relating to property were a “private matter” for landlords. The Garda’s role was peripheral, in ensuring public order was maintained as an order was being enforced.

It was work the Garda was obliged, and expected, to carry out, she said. While gardaí did it well, it was “a pity” they appeared to deviate from their own protocol this week.

Mr Harris has said fire retardant hoods should only be worn in conjunction with riot helmets. He sent a directive to gardaí informing them of this and has also sought a report on the incident in question – outside a property on North Frederick Street.

Taoiseach Leo Varadkar said he, like most people, did not want to see landlord’s agents and gardaí working in balaclavas on the streets. But he said the gardaí involved were enforcing the law.