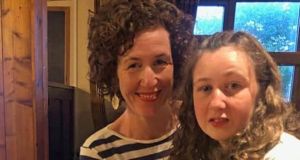 Meabh Quoirin with Nóra. The 15-year-old, who had learning difficulties, had been on a family holiday at the Dusun resort when she went missing. Photograph: Family handout

The parents of Franco-Irish teenager Nóra Quoirin will be seeking a court revision of the inquest verdict recorded by a Malaysian coroner.

Meabh and Sebastien Quoirin have instructed their lawyers to file for a revision, which would be carried out by a judge in Seremban, the city where the inquest took place.

“A high court judge would be appointed to reconsider all of the evidence that was previously presented during the inquest,” Ms Quoirin told The Irish Times.

“No new documentation, evidence, or witness statements can be introduced at this point.”

The coroner Maimoonah Aid ruled on January 4th that no third party was involved in Nóra’s death, saying: “It is more probable than not that she died by misadventure, i.e. she had gone out of the Sora House on her own and subsequently got lost in the abandoned palm oil plantation.”

The coroner ruled out homicide, natural death, and suicide. She also decided against recording an open verdict, which the Quoirins requested in their submissions.

The Quoirin family said they were “utterly disappointed” by the coroner’s verdict.

Physical proof of what happened to Nóra is lacking, the Quoirins say, so no one can be certain about any of the theories put forward.

“An open verdict is the only logical conclusion anyone could come to,” Mr Quoirin said. “It would be a recognition that we cannot know all the answers.

“An open verdict would also go some way to recognising who Nóra actually was, and what she was, and wasn’t, capable of.”

Nóra (15) disappeared from a holiday chalet in the Malaysian jungle on the night of August 3rd/4th 2019. Her naked body was found next to a stream about two kilometres from the Dusun resort ten days later. Her parents remain convinced that she was abducted.

Nóra had learning and physical disabilities and attended a school for children with special needs.

“A lot of evidence was presented about who Nóra was, her character, her personality, and her traits and tendencies, but we feel that these things were not well understood and therefore were not well integrated into the inquest findings,” Ms Quoirin said.

“There was a great deal of evidence that was presented at the inquest that we feel the high court needs to look at again, examining the context within which Nóra really led her life and was able to operate.”