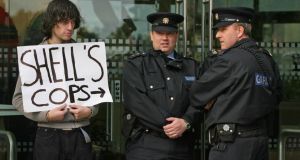 A Shell to Sea campaigner leaves the Shell headquarters in Dublin city centre after a protest. A report by the Garda Siochána Ombudsman Commission (GSOC) has found “no evidence” of the purchase or delivery of alcohol to Garda stations” involved in policing the Corrib gas project “nor of any misconduct of Garda members”. Photograph: Niall Carson/PA.

The Garda Siochána Ombudsman Commission (GSOC) has found “no evidence” of the purchase or delivery of alcohol to Garda stations” involved in policing the Corrib gas project “nor of any misconduct of Garda members” .

An Garda Síochána and Shel E&P Ireland have welcomed the two-page report.

The GSOC investigation was initiated last October following two complaints from a partners in a company,OSSL, which was employed by Shell from 2005 to 2010 to provide services to the Corrib gas project.

The report says that the complainants claimed that members of An Garda Síochána at Belmullet Garda station, and “possibly other locations”, accepted gifts of alcohol, delivered by their company, in December 2005, December 2006 and December 2007.

The complainants claimed that “members of the Garda Síochána failed to correctly address or properly investigate these matters”, it says.

The issue dates back to a report which OSSL lodged at Belmullet Garda Station in December, 2011, claiming it was owed €43,000 for a delivery of €29,500 worth of alcohol to the same station.

The delivery was alleged to have occurred in December 2007, six months after one of the most fractious protests in the Corrib gas dispute which led to a GSOC investigation recommending that a senior Garda officer be disciplined.

An initial garda inquiry ‘found no evidence’ to support the claim and Shell also said its own internal inquiry returned no such evidence.

However, in July of last year second inquiry was assigned to Supt Thomas Murphy, then of Swinford Garda station.

Mr Kane claimed his company was paid by Shell for smaller amounts of alcohol delivered to the garda station before Christmas 2005 and 2006, and that it was also employed to provide “sweeteners” for the local community, the invoices for which were shredded.

Shell confirmed that OSSL had provided contractual services, but “unequivocally denied” claims about alcohol deliveries. It said that on August 2nd, 2012, OSSL signed a final settlement in the presence of its legal advisers.

GSOC says in its report that it conducted a “thorough, independent investigation into the allegations”.

“The investigation process was outlined to the complainants, including the need to retrieve documents from them,” the report says.

“Shortly after the meeting on this subject, the company indicated by e-mail that they would no longer be cooperating with the investigation.”

GSOC continued its inquiries, which included a “detailed interview of a senior officer” and interviews with Garda members, but it found no evidence of purchase or delivery of alcohol to Garda stations.

It notes that the complaints and allegations “have been made public and had the potential to undermine publicconfidence in the Garda Síochána, as well as affect the reputation of others”.

“We hope that publicly explaining the proportionate, fair and independent investigation of this matter will promote confidence of members of the public and of the Garda Síochána in police oversight in this country,”GSOC says.

OSSL managing director Des Kane said that he was “not surprised” by the GSOC report findings, as “it is what we expected”.

Mr Kane said that his company “would not rest until we get a satisfactory outcome”.

Shell E&P Ireland (SEPIL) managing director Michael Crothers said: “We have always treated the OSSL allegations with the utmost gravity, because they are completely contrary to our company’s business principles.”

“These allegations have impacted negatively and unfairly on members of staff and on local residents. SEPIL co-operated fully with the GSOC investigation and we welcome the findings confirmed to us in writing,” Mr Crothers said.