Garda reform will not be on same scale as RUC-PSNI process, says Drew Harris 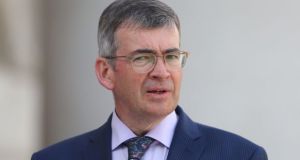 The reform of An Garda Síochána in the years ahead will not be on the same scale as the RUC’s transition to the PSNI, Garda Commissioner Drew Harris has said.

Having departed his position as deputy chief constable of the PSNI and taken up the role of Garda commissioner in the early hours of last Monday, Mr Harris said he believed the public had more trust in frontline gardaí than in senior management.

“There is trust in the gardaí…there’s trust certainly in the local gardaí, perhaps there’s less trust in the senior management and myself. But I have to work on that,” he said.

Mr Harris was speaking to Miriam O’Callaghan on RTÉ Radio 1 on Sunday morning, having already made himself available to print and other broadcast media last Thursday just four days into his five-year term as the new commissioner.

Having joined the RUC as an 18-year-old in the early 1980s, Mr Harris was a member of that force as it underwent very significant change, including a rebranding to become the PSNI.

The change of name came in 2001 following the Patten Commission report. And since then the PSNI has tried to become more representative of the community, including the recruitment of more catholics.

During the early period of reform, a redundancy package was offered to members. And many in the Garda are waiting to see if the Commission on the Future of Policing in Ireland, whose report is due next week, will recommend the same arrangement for gardaí.

However, Mr Harris said the scale of change about to happen in the Garda was not the same as that witnessed in the North.

“There is a difference here,” he said.

“The transition from RUC to PSNI was at a point in time. But part of the arrangement was the severances packages. And that was to allow the organisation to change quicker than it might have naturally.

“It was a huge, fundamental reform of an organisation. The same change process…Well we have to wait [TO SEE)]what the Commission on the Future of Policing is saying. But there’s no indication whatsoever it’s going to be of the same scale.”

The commission is headed by former US police chief Kathleen O’Toole and was asked by Government to spend the last year examining the Garda and recommending reform. Its report is due next week.

The report, and Mr Harris’s appointment, follows a period in which the Garda has been damaged by a series of controversies, including the treatment of whistleblowers, inaccurate crime figures and misclassified homicides, among others.

Concern has been expressed in some quarters at Mr Harris’s appointment on the grounds he has been a member of the security services of a rival, if friendly, State. However, he believed his appointment was being criticised by “keyboard warriors”.

He could not think of one scenario in which he would be sitting in a room with other Garda officers and being unable to share information about a crime being discussed because he came by that information during his PSNI days and was bound to secrecy.

He had no information, for example, on the Dublin-Monaghan bombings. He did not have information files about the suspects, as had been suggested. And the sharing of any information was now a matter for the PSNI.