New gardaí must be prepared to disobey an order, says Minister

There were 27,000 applicants for 300 new recruits into the Garda, which is rebranding 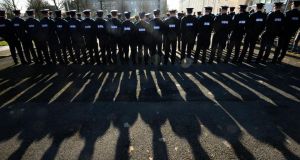 Garda recruits waiting for Taoiseach, Enda Kenny, Tánaiste Joan Burton and Minister for Justice Frances Fitzgerald, who said they must have: “The courage to say ‘no’ if you believe the instruction is wrong. The courage to cry ‘halt’ to a practice that may have been going on forever.” Photograph: Dara Mac Dónaill/The Irish Times

New members of the Garda must be willing to reject an order if they feel it is wrong and have the courage to blow the whistle on unhealthy practices in the force, said Minister for Justice Frances Fitzgerald.

She also told 100 new Garda recruits, on their first day in training, that their actions would shape the Garda’s damaged image.

“When we think of the courage that gardaí need to show, we automatically think of the days when a gun is turned on you, a knife is raised at you or a car is driven at you,” she told the students at the Garda College, Templemore, Co Tipperary. “But courage is also called for when there is no physical threat. Courage can be called for in the middle of a very normal day.

“The courage to say ‘no’ if you believe the instruction is wrong. The courage to cry ‘halt’ to a practice that may have been going on forever, but that should stop right there and then.”

Her comments follow almost three years of controversy in which many gardaí were found to have abused their positions in terminating penalty points for drivers without reason.

And the treatment of the Garda whistleblowers who tried to expose the practice resulted in, along with some other issues, the resignation of former minister for justice Alan Shatter and the sudden retirement of former Garda commissioner Martin Callinan.

The Government has insisted a new syllabus at the Garda College will encourage criticism, from new Garda members, of established practices.

They also claim the new training course will encourage recruits to question parts of policing culture without fear of colleagues’ reactions.

Ms Fitzgerald said a career in the Garda would be rewarding and never boring. She told the new class they would “rescue crime victims from despondency and despair” but they also needed to be prepared to face criticism. “Some of that criticism won’t be fair,” she said. “At the moment, for example, An Garda Síochána is at the receiving end of a lot of general criticism it does not deserve. That criticism will inevitably get to you; don’t let it.

“General criticism that paints every garda, or indeed every politician, as bad is just plain wrong and must be rejected.”

She said the Garda was at the start of “a new phase” in which Garda Commissioner Noirín O’Sullivan and the Government was trying to create “one of the best police forces in the world”.

“Why not? That’s the objective; that’s the vision. And that’s what you’re part of.”

The class of 100 that began training on Monday is part of the first wave of newcomers since recruitment ended in 2009 after the economy collapsed.

At the end of last year two 100-strong classes entered Templemore. The first of them will start work at Garda stations in May.

Some 27,000 applications were received when the new positions were advertised. Ms Fitzgerald yesterday said the Government was committed to ongoing recruitment and that retirement trends were being studied to assess need.

Taoiseach Enda Kenny, who was also at the event, said “the Garda College will never close again”.