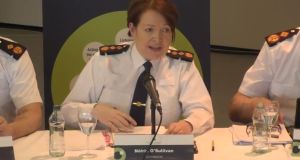 Garda Commissioner Nóirín O’Sullivan has said she welcomed the opportunity of a tribunal of inquiry to address in public the recent controversies involving An Garda Síochána.

Appearing in public before a meeting of the policing authority in Dublin on Thursday afternoon, Ms O’Sullivan said the Garda remained committed to providing a quality policing service, even though she was concerned about the damage done to public confidence in the force.

He has also said the commissioner, then deputy commissioner, was aware of the campaign. Ms O’Sullivan has repeatedly denied the allegations.

“We welcome the fact we will be able to deal with these issues in a public forum,” she said.

Asked if she was concerned that public confidence in the Garda had been damaged she said the “overture of negative sentiment” undermined many institutions of the State.

“That is something that as police professionals we have to live with every day,” she said. “Am I concerned about it? Of course I am.”

Despite not having a fully-resourced senior team and dealing with the controversies, which she described as “legacy issues”, there had still been a 30 per cent decline in property-related crime in recent years.

Ms O’Sullivan and her senior team were determined to “support, guide and lead the men and women of An Garda Síochána”.

Assistant Commissioner Eugene Corcoran said the Garda had been curtailed in its ability to respond to and address recent controversies ventilated in the media. However, when people could “see and hear” the responses at the tribunal, he believe it would improve confidence in the Garda.

John Barrett, the Garda’s executive director of human resources and development, said there had been no reduction in the number of applicants for new positions in the Garda. despite recent negative issues.

There had been 31 applications for the senior posts currently advertised and the “feedback loops” from people applying for new posts in the Garda and for promotions within the force were positive about the force.

Deputy Garda Commissioner John Twomey said “tribunals have happened before and tribunals will happen again”, but the Garda was determined to maintain policing performance and reform within the organisation.

Chair of the policing authority, Josephine Feehily, opened the meeting by clarifying what her agency’s role was in seeking to address the recent issues.

She said the meeting was taking place at a time of “very considerable public controversy” and a public tribunal alleging Garda wrongdoing.

Whatever the role the authority “ought to have”, its remit related to overseeing “the performance of the body corporate” and “individual accountability was a different matter”.

“As a matter of course we are not able to discuss matters involved in individual cases or the tribunal of inquiry,” she said.

However, it is within its remit to discuss how current matters related to “performance and public confidence in the Garda”.