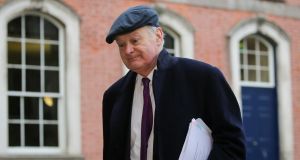 The lead barrister in the team that represented Nóirín O’Sullivan at the O’Higgins commission grew heated on a few occasions when giving evidence at the Charleton tribunal.

It is an unusual matter to have a room full of barristers who are all extensively briefed lined up to question one of their colleagues about his conduct in an extremely important case.

As Colm Smyth SC pointed out, he and his juniors at the 2015 commission hearings were given only a few days to prepare for their mammoth task, yet here he was in front of a room of people who’d been given months to get ready to question him.

The commission sat in private in 2015 to examine complaints that had been made by whistleblower Sgt Maurice McCabe. When its report was published in 2016, media reports based on leaks that O’Sullivan’s team had attacked McCabe’s motivation ignited a political storm.

Smyth made it clear that he felt the media and political presentation of what he had done, in private, at the commission, was incorrect and unfair. “I have suffered personally,” he said.

At one stage he said that it was Michael McDowell SC, who represents McCabe at the tribunal and who represented him at the commission hearings, who had created the notion in the mind of Mr Justice Kevin O’Higgins that McCabe’s character was being attacked.

The tribunal is investigating whether O’Sullivan used unjustified grounds to discredit McCabe at the commission hearings. One of the striking issues to emerge to date is the extent to which O’Sullivan was apparently distant from what was going on at the tribunal in her name.

She had not met with her legal team when the commission hearings began on May 14th, 2015, and there was an immediate row over whether she was attacking McCabe.

Her first contact with Smyth was on May 21st in her office, for a meeting that lasted 20 minutes. The attendees were Smyth, O’Sullivan and Chief Supt Fergus Healy, the then commissioner’s liaison at the commission.

Smyth said he went along despite reservations about doing so without his instructing solicitor, Annmarie Ryan, of the Chief State Solicitor’s Office. He said he was asked to go by Ryan, and was told that O’Sullivan wanted to meet him alone, and not with his juniors. There may have been some mention of the commission, he said, but no discussion. There was no discussion in relation to challenging McCabe’s motivation.

Healy has given a different version of the meeting, saying he suggested it. He said O’Sullivan and Smyth discussed their shared concern that serious allegation made by McCabe against senior officers would have implications for the force if they were upheld. In the event, they were dismissed by the commission.

During Healy’s evidence, Mr Justice Peter Charleton expressed surprise at the absence of Ryan. The solicitor, who had not by that stage had a meeting with O’Sullivan, had been “begging for a consultation”, he observed.

Smyth said O’Sullivan gave him the “go ahead” to do what was necessary to defend his officer clients.