Garda Commissioner Nóirín O’Sullivan has said she is not surprised that the Policing Authority found the same complaints coming up in different reports about An Garda Síochána. Video: Ronan McGreevy 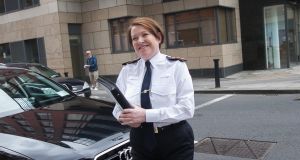 Garda Commissioner Nóirín O’Sullivan said: “It does not come as any surprise that some of the recommendations in that [O’Higgins] report are recurring recommendations.” Photograph: Gareth Chaney/Collins

Garda Commissioner Nóirín O’Sullivan has said she is not surprised that the Policing Authority found the same complaints coming up in different reports about An Garda Síochána.

In her first public comments since the Policing Authority strongly criticised Garda management for repeated failures of governance, Ms O’Sullivan said she welcomed a public session with the authority on June 13th.

After a private session last week, the authority expressed “serious concern at the impact on victims and at the systemic performance and management failures”.

It also said it was dismayed that the same performance failures identified in previous reports on the Garda had reoccurred.

In response Ms O’Sullivan said the forthcoming public meeting will demonstrate to the public that lessons had been learned as a result of the O’Higgins report into allegations of garda misconduct in the Cavan and Monaghan districts, and that adequate investment, which is “badly needed”, is coming on stream.

Speaking at Bloom in Dublin’s Phoenix Park on Thursday where she was launching a Garda community initiative, she stated: “It does not come as any surprise that some of the recommendations in that [O’Higgins] report are recurring recommendations.

“It illustrates very clearly that there needs to be a lot of work done by An Garda Síochána in a very open, demonstrable way that reassures the public.”

Ms O’Sullivan was asked about criticisms voiced by Independent TDs, Mick Wallace and Clare Daly, who said the Commissioner was part of a Garda management which did not implement reforms in the force when they should have been implemented.

She responded: “I don’t think there is either time or space to go into it here but that is something we can explore further.

“That’s why we were very anxious that the authority bring forward a public meeting because I think it is very important that the public are reassured that lessons have been learned, that there is now adequate levels of investment which will allow us to make some of those changes that are very badly needed.”

She acknowledged that many of the criticisms in the O’Higgins report were “quite right” around the issues of incident management and supervisory management, but that was now part of Garda reform.

“We have now the opportunity to put those measures in place because we now do have the investment,”she said.

Ms O’Sullivan said there was now full international co-operation in relation to the recent spate of gangland shootings which have resulted in the deaths of seven people.

She said there had already been 23 arrests made and large quantities of ammunition and property had been seized.