Nóirín O’Sullivan did not set out to be ‘duplicitous’ 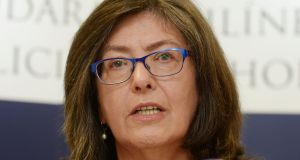 Chairperson of the Policing Authority Josephine Feehily: Nóirín O’Sullivan’s “intentions certainly would have been to perform [her] role honourably”. Photograph: Alan Betson

The head of the Policing Authority has said she does not believe former Garda commissioner Nóirín O’Sullivan set out to be “duplicitous” in her dealings with the authority and the Government.

Attending an Association of European Journalists function in Dublin, Josephine Feehily, the head of the Policing Authority, was asked if she found Ms O’Sullivan to have been “duplicitous” in her relationships with the authority, the Garda Síochána Ombudsman Commission and the Government.

“I don’t believe Nóirín set out to be duplicitous,” Ms Feehily said.

“I think Nóirín had a very strong sense of mission and vision for the Garda organisation. I think partly what happened was there were so many crises that it became almost overwhelming. I haven’t any insights into her reasons for choosing to retire other than what she put in the public domain in her statement.

“I think she was somebody who had a really strong commitment to policing and the guards and her intentions certainly would have been to perform that role honourably.”

Ms Feehily said a new Garda commissioner recruited from outside the force should be able to bring in a team of people with them at a senior level. Any outsider should be given scope to bring in a personal team to “help with the transition”, she believed.

The Policing Authority will run the recruitment process for the next commissioner. It has submitted proposals to Minister for Justice Charlie Flanagan on the pay package to be offered for the post.

Ms Feehily said the recruitment process would take about six months from when it starts, although she said the process had yet to get under way fully. The authority is awaiting a number of clarifications from the Government, she said.

On whether someone from outside An Garda Síochána could take over as commissioner, she said it would be challenging, but possible.

“Policing is a global service so there have to be similarities that people would bring. I think it would present certain challenges but I think people move around large, complex organisations all the time and they somehow manage.

“We would be of the view that a person joining who wasn’t from, certainly from the guards or from Ireland, might need a small personal team to help with that transition.

“But I have to be really careful not to give any sense that we have a view as to whether it ought to be an insider or an outsider because we will be involved in the selection. We have a completely open mind on it. I don’t see it as a barrier.”

Ms Feehily has previously said the overall pay package for the position needed to be improved from the €180,000 salary received by Ms O’Sullivan. Government figures have previously speculated about a salary of about €300,000.

However, Ms Feehily said pay at senior levels across the public sector is often not properly described and pension benefits are not flagged. “So the package would need to be maybe a bit different and described a bit differently,” she said.