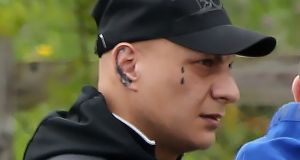 Hamid Sanambar who was shot dead yesterday pictured here, at the scene of the murder of Sean Little last week. Photograph: Collins Dublin

The getaway car used by three masked men who killed Hamid Sanambar in north Dublin on Tuesday was not stolen and was bought at a car dealership in south Dublin, gardaí have said.

Detectives have established contact with the man believed to have sold the Toyota Avensis less than two weeks ago and were due to interview him on Wednesday afternoon.

Gardaí investigating the murder of the Iranian national, who was granted political asylum in the Republic, were also set to review dashcam footage recorded in ambulances being driven to and from Beaumont Hospital.

The hospital is close to the Sanambar murder scene on Kilbarron Avenue, Kilmore West, north Dublin.

Det Insp Mick Mulligan, of Ballymun Garda station, said an intensive murder investigation was under way and was intent on bringing the killers to justice.

“We have adequate resources to deal with [the murder investigation] and the national Garda units are here with us as well,” he said.

The killing of Sanambar (42) occurred on Kilbarron Avenue, just behind Beaumont Hospital, and the getaway car was found in nearby Castletimon Gardens at about 3.45pm, some 15 minutes after the killing.

Sanambar was shot dead in the front garden, a paved driveway, of the Little family, whose 22-year-old son Seán Little was murdered in north Co Dublin last Tuesday night.

Asked if the murders were linked, Det Insp Mulligan said the two killings were being examined together.

“Naturally we are taking cognisance of the location where this murder happened,” he said of Sanambar’s killing.

“We are not connecting both at this time but it is something we are considering. We are co-ordinating with the other investigation teams in relation to the other murders,” he added in reference to the killings of Mr Little and Jordan Davis last week and Zach Parker in January.

While the getaway vehicle used by the three men who killed Sanambar had been set on fire and was completely destroyed in the flames, gardaí say it was a silver Toyota Avensis 04 D 71806.

They believe it was bought from a small car dealership in south Dublin about nine days ago. While they were due to speak with the seller they are also keen to hear from any members of the public who may have seen the vehicle since March 20th.

Det Insp Mulligan said members of the public, especially people who lived near yesterday’s crime scene, may have information that could aid the murder investigation.

“We are particularly interested in the Toyota Avensis car and its whereabouts since it was sold on May 20th,” he said.

“If anyone has any information about where it was parked up, they could contact us at Santry Garda station or Ballymun station.”

Detectives investigating the killing of Sanambar, a convicted criminal and suspected gangland gunman, wanted to speak to anyone who saw anything suspicious on Kilbarron Avenue or Castletimon Gardens, about 1.5km away, or in that general area.

While the murder occurred at 3.30pm, gardaí believe the killers were in the general area for some time leading up to the killing.

Three men were in the vehicle, all of them masked, and gunned down Sanambar outside the family home of Mr Little, who was shot dead last Tuesday night near Walshestown, north Co Dublin.

Gardaí are working on the theory that Sanambar had gone to the house to visit Mr Little’s family but that his killers knew he would be there and waited for him.

Gardaí have not ruled out the possibility that Mr Little’s associates believed Sanambar was involved in his murder and set him up to be killed in revenge.

Both men were linked to a drug dealing gang in Finglas; the same group also suspected of the murder of Zach Parker (23) in Swords, north Co Dublin, in January and the murder of Jordan Davis (22) in Darndale, north Dublin, last Wednesday.

Gardaí suspect the Finglas gang, which is linked to the Kinahan cartel, killed minor drug dealers Parker and Davis over unpaid drugs debts.

One line of inquiry is that the same group also killed Mr Little and now Sanambar has been murdered, by Mr Little’s associates, in revenge for that killing.

The murder has been described as a matter of “great concern”, by Minister for Justice Charlie Flanagan.

“Its unacceptable in any part of the country that we would have three murders in such a short space of time,” Mr Flanagan said.

Mr Flanagan has said he is satisfied gardaí have sufficient resources to bring those responsible for three recent murders to justice.

Mr Flanagan this morning said that he has spoken with senior gardaí in the wake of the killings and that “I’m satisfied that resources they are deploying to the area will be such as to bring the killers to justice.”

He said: “The matter of resources and operational issues are ones for the Garda Síochána. These are issues that are under review and I’m satisfied that the Garda Commissioner and his team will make appropriate resources available.”

Mr Flanagan was speaking at the launch of the 2018 annual report of the victim support at court service at the Criminal Courts of Justice.

He said he would visit the area where a man was shot dead yesterday, and urged those with information to come forward.

“I agree with the gardaí that anyone in the area with information should come forward and provide that information to An Garda Síochána. That evidence will be required. I’m satisfied that there will be a relentless pursuit on the part of the gardaí to bring these killers to justice.

He said that he has also spoken with his Cabinet colleagues Richard Bruton and Finian McGrath, in whose constituency the killings have taken place.

The killing comes at a time when gardaí are dealing with three violent feuds in Dublin and one in Drogheda, Co Louth.

While associated with Dublin-based criminals, and having worked closely with Mr Little of late, Sanambar had previous addresses in several parts of Ireland, including Cork and more recently in Longford.

Having come to Ireland as an asylum seeker, he was granted permission to remain here, and had been living in the Republic since he was in his 30s.