More than 75% of new gardaí allocated to Louth and Dublin 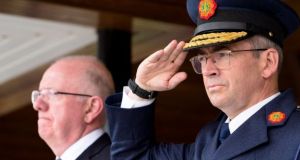 Garda Commissioner Drew Harris said that the decision to send almost 160 of the 201 new recruits to Dublin and Louth, was a very deliberate decision. File photograph: Don Moloney/Press 22

Minister for Justice Charlie Flanagan has welcomed the decision by the Garda Commissioner to allocate over three quarters of new Garda recruits to help tackle gangland crime in Dublin and Louth.

Minister Flanagan said that the decision by Drew Harris to allocate 128 of the new 201 probationer gardaí to various Dublin divisions and a further 30 to Louth was to be commended but stressed that it was an entirely operational decision by the commissioner.

“These newly attested members, who were already earmarked for these areas before the recent murders, will help strengthen the Garda response to gang violence and increase public safety in their communities,” he said.

Mr Flanagan said the latest group of recruits brings to 2,800 the number of new gardaí that have attested and been assigned to frontline policing duties since the Garda College re-opened in 2014. Garda numbers now stand at 14,000 with a further 200 recruits passing out later this year, he said.

Mr Harris said that the decision to send almost 160 of the 201 new recruits to Dublin, which has seen three gangland murders in recent weeks, and Louth, where a gangland feud had erupted in Drogheda, was a very deliberate decision.

Mr Harris acknowledged that there have been serious incidents in both Dublin and Louth in recent months but he said that gardaí were continuing to commit resources to combating organised crime and that investment was beginning to yield results.

“There’s not a week goes by that we don’t have a major success around the possession of drugs and bringing people to justice. Even in recent weeks we’ve seen convictions of very serious offences in relation to gangland violence,” he said.

Mr Harris said that the gangland crime in both Dublin and Louth stemmed from turf wars over drugs. He said they had clearly escalated in terms of viciousness and it was particularly shocking to see young men in their 20s being gunned down in such disputes.

“It is a loss of life and that is always shocking. Murder is always shocking, it’s always vicious and it could have been avoided and what we are there to do is try as best we can to prevent further attacks and investigate these to bring the perpetrators to justice.

“We want to make sure it doesn’t happen again but at the same time there are hardened organised crime groups that are vicious and they are prepared to engage in extreme violence. In effect they are turf wards with each other but we want to interdict in that.”

Stressing that An Garda Síochána are “not casual observers” in such gangland turf wars, Mr Harris welcomed comments by the Archbishop of Dublin Dr Diarmuid Martin prohibiting ostentatious shows of strength and wealth at funerals by leading crime families.

“We very much support Archbishop Martin’s comments, a funeral should not in effect become a show of strength. We want to make sure that we play our part to make sure the law is not broken and that people see that the forces of law and order are in control,” he said.

Mr Harris acknowledged that crime families are not breaking the law in terms of hiring horse drawn carriages and floral wreaths in the shape of guns but he stressed gardaí would be present at such funerals to ensure the community is not “scared by these overt displays of gangland affiliation.”

Minister Flanagan also backed the new directive by Archbishop Martin, saying he had spoken to the archbishop on Thursday and expressed his support to him for the measure which is due to come into place in all churches in the Archdiocese of Dublin.

“I don’t believe there should ever be any opportunity to glorify or highlight the attractiveness of people engaging in criminal activity - I approach this from a criminal justice point of view that the gardaí are working on 24/7 basis to bring those people to justice, “ he said.