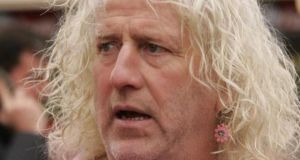 Independent TD Mick Wallace has claimed that some members of the Garda are involved in drug dealing.

The claims include allegations that a senior garda in the Midlands supplied drugs for distribution to his girlfriend; that gardaí supervised the removal of drugs from boats and that gardaí have tasked drug dealers with selling seized drugs.

Speaking this week at an event in Dublin called Banter, Mr Wallace said he and TD Clare Daly and then TD Luke Ming Flanagan “didn’t bring a quarter of what information we actually have from serving guards, ex-guards, members of the public of some terrible things that have been going on and are still going on in the country that involve malpractice”.

He said that a garda whistleblower reported an alleged incident where a garda supplied his girlfriend with drugs.

“For two years (the whistleblower) watched a senior guard in his barracks go to Dublin once a week and bring drugs back in his squad car and store them in the barracks,” Mr Wallace said.

The guard “used to keep them there and just give them to a drug dealer, who was a woman that he was having a relationship with – and she was the main drug dealer in the area – and he’d give them to her as she needed them and it (the barracks) was used as the depot for the drugs.”

Mr Wallace said he raised the claims in the Dáil nine months ago and that Gsoc launched an investigation. He said the whistleblower contacted him two weeks ago to claim he was being intimidated in work, that “his life was being made hell” and that he had heard nothing back about the investigation.

Separately, Mr Wallace said another garda, who was based in the south of the country, made claims about gardaí allegedly helping to unload a shipment of drugs from a boat.

“He watched drugs being taken off boats and gardaí supervised the offloading of them,” said Mr Wallace. Mr Wallace said the garda claimed to have lost his job after he raised the allegations with Garda headquarters in Dublin.

Mr Wallace also said he was aware of allegations of gardaí getting local drug dealers to sell seized narcotics.

“Fellas have come to us and told us that they were dealing in drugs. They were caught by the cops, they weren’t turned in, and the cop says, ‘we’ll be back to you. They come back two weeks later and say: ‘Here. Sell this for us and bring us back the money.’ There’s a good bit of that going on.”

Speaking to The Irish Times today, Mr Wallace stood over his remarks. “We raised it in the Dáil before, last spring.

“In fact it was Ming who mentioned it first. It is being investigated by the guards and GSOC are investigating. It is going through official channels,” he said.

A Garda spokeswoman did not comment on Mr Wallace’s specific remarks today, but said anybody with information pertaining to garda involvement in supplying drugs should report them officially.