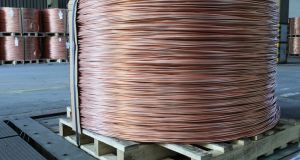 Criminals have moved from targeting overhead power lines in rural areas to breaking into substations in both urban and rural areas and stealing the copper wiring inside. Photograph: iStock

The number of copper thefts from ESB power stations has doubled this year, the Garda said as it announced a campaign to curb the theft and sale of valuable metals.

There have been 43 break-ins at ESB substations so far this year, twice the number which occurred in 2017 and 2018. About €100,000 worth of material has been taken and several break-ins have resulted in the loss of power supply to an area, said Paul Mulvaney of the ESB. Some break-ins have also resulted in serious injury and fatalities to the intruders, he said.

Criminals have moved from targeting overhead power lines in rural areas to breaking into substations in both urban and rural areas and stealing the copper wiring inside.

There are several gangs engaged in scrap metal theft in Ireland, said Assistant Commissioner for Special Crime Operations John O’Driscoll. Some are from Ireland while others come from different countries and travel around stealing scrap metal.

International gangs travel from country to country, he said, and are more likely to operate in countries where the response by the authorities is weak.

“That’s why we have seen a spike in crime of this nature. That’s why we teamed up with the ESB and Crimestoppers. We’re trying to bring figures back down to where they were three years ago and eliminate it if at all possible.”

Mr O’Driscoll urged the public to report suspicious activity as soon as they notice it, rather than waiting to find something has been stolen. “Make the phone call to us and we’ll assess it.”

Gardaí have received reports of criminals engaging in threatening or intimidating behaviour when challenged during thefts, Mr O’Driscoll said. This should also be reported to gardaí, he said.

“The more of those incidents that are reported to us the more likely we are to bring these criminals to justice.”

The Irish Times recently reported that some recycling plants are leaving metal out for criminals to take, rather than risk violence or intimidation.The State’s largest waste company Beauparc, has said workers, who have been told that their houses will be burned down, are too afraid to testify in prosecutions for fear of retribution.

Gardaí have told Beauparc that cash sales “are acting like seed capital for organised criminal gangs”, the company has told Minister for the Environment Richard Bruton.

Mr O’Driscoll said scrap metals gangs are engaging in “polycriminality”. They might steal scrap metal one day and commit a different type of offence, such as burglary or drug dealing the next.

Gardaí have had some success in targeting scrap metal gangs recently. In the last two months the number of break-ins at ESB substations have dropped off dramatically.

Last weekend, in an operation carried out in another jurisdiction, police uncovered details of the whereabouts and operations of a scrap metal gang operating in Ireland, Mr O’Driscoll said.

Waste disposal companies have called for a ban on cash sales of scrap metal which make it far more difficult for gardaí to track the sale of stolen material.

Mr O’Driscoll said such a ban is being considered. “It is invariably a cash business which leaves it less open to scrutiny than other transactions,” he added.