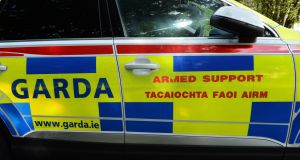 A manhunt is underway in the southeast for two men after the driver of a car opened fire on unarmed gardaí pursuing him in a patrol car.

A manhunt is underway in the southeast for two men after the driver of a car opened fire on unarmed gardaí pursuing him in a patrol car in Co Wexford.

Gardaí appealed for the public’s help in tracing the men and cars involved in the incident, which happened near Gorey early on Wednesday, but warned that the suspects were dangerous and should not be approached.

The series of events began unfolding at around 8.30am when gardaí on patrol in a vehicle went to check out reports of a man with a scarf over his face acting suspiciously at Gorey Hill, a green area close to Gorey town.

When the gardaí arrived and approached the man he pointed a handgun at them and warned them to stay back. While threatening to shoot the officers, the man got into a blue BMW 318 car, registration 06W1012, and drove away from the scene at speed.

He was followed by the two uniformed and unarmed gardaí in their car as they called for armed back-up. While being pursued on the R725 Gorey to Carnew road, the man twice slowed his car and discharged shots at the garda vehicle.

After being shot at, the pursuing gardaí aborted their chase of the gunman’s car, enabling his escape.

A car was that found burnt out in Banntown, Co Wexford is believed to be the BWW that the shots were discharged from.

The man who fired the shots remains at large and a search was also underway for a second man who gardaí suspect aided him in escaping in a second vehicle, believed to be a dark coloured Skoda Fabia.

The BMW was not stolen but was bought recently and registered under what investigating gardaí believe is a false name and address.

The driver was described as being 6ft tall and of slim build. He was wearing a long black jacket and had a scarf covering his face.

Gardaí believe the armed man was disturbed as he was about to carry out a crime; possibly a shooting, an armed robbery or the handover of a gun.

While there have been a number of gun incidents in the Wexford area related to the Kinahan-Hutch feud, it was unclear why the suspect was armed with a loaded handgun just outside Gorey.

Supt Gerard McGrath, of Gorey Garda station, said the gardaí who were fired at had escaped injury and were being supported after a traumatic experience.

“I will ensure that this criminal act is investigated fully and I appeal to any member of the public with any information, no matter how small, to call An Garda Síochána with that information to bring these dangerous culprits to justice.”

Gardaí believe the men were in Gorey and Clough and the general north Wexford area just before and after gardaí were fired at. They appealed to the public to report any sightings of the men or their cars in recent days, particularly on late on Tuesday or early on Wednesday.