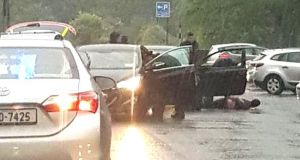 The scene of the incident in North Cork on Thursday evening

The Garda Siochána Ombudsman Commission has begun an investigation after a man in his 40s was shot at a garda checkpoint in North Cork last night.

Gardaí notified Gsoc following the shooting incident which happened at the Spa on the Mitchelstown Road in Mallow at around 8.30pm last night.

It is understood that the injured man suffered a non life threatening injury to his shoulder when a garda discharged his weapon at the checkpoint in Mallow.

Initial reports from gardaí suggest the driver of the car failed to stop and was driving at an officer with a member of the Armed Support Unit discharged his weapon.

The injured man, who is from Togher in Cork city, was treated at the scene for his injury before being brought by ambulance to Cork University Hospital.

Gsoc officers travelled to Mallow on Thursday night to examine the scene of the shooting in which gardaí say that just one shot was fired by the ASU member.

It is expected that Gsoc investigators will interview the injured man as well as gardaí, including members of the ASU, who were on duty at the checkpoint.

The injured man underwent surgery in CUH where he remains under garda detention as gardaí carry out a separate investigation into drug trafficking.

Meanwhile gardaí have also arrested a 47-year-old man, who was a front seat passenger in the black VW Golf driven by the man injured in the shooting.

The passenger, who is originally from Gurranebraher in Cork city but has been living more recently in Mid-Cork, was arrested on suspicion of drug trafficking.

He was arrested after gardaí carried out a search of the car and found a quantity of white powder which they suspect may be heroin or cocaine and has been sent for analysis.

The man is currently detained at Mallow Garda Station under drug trafficking legislation which allows gardaí hold suspects for up to seven days.

Gardaí suspect the two men had travelled down from Dublin yesterday evening with a quantity of drugs which they had collected in the capital for sale or supply in Cork.

The scene of the shooting in the Spa remains cordoned off today to allow garda technical experts carry out a forensic examination of the scene and the car.