Man killed in hit-and-run by someone known to him, gardaí believe 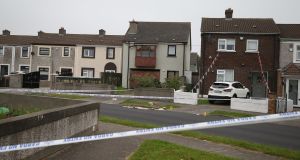 The scene in Tallaght on Monday morning. A murder investigation has not been launched but this may change depending on interviews with the suspect and the results of technical analysis of the scene. Photograph: Nick Bradshaw 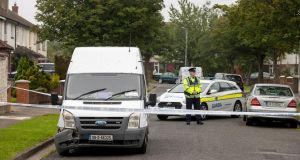 At least four shots were fired at a house in Tallaght on Monday morning shortly before a man was killed in a hit-and-run.

Gardaí suspect the van was being driven by a man known to the victim, who was named locally on Monday as Dan Reilly.

A suspect, aged in his early 30s, is in custody.

The incident began shortly before midnight on Sunday when neighbours reported hearing shouts coming from a house on Tymon Road North in Tallaght.

This was followed by the sound of gunfire. Four gunshots can be heard on video footage recorded at the scene. At least one of these shots hit the house. A window was shattered but no one was injured.

A short time later Mr Reilly, aged in his 50s, was struck by a Ford Transit van which was then driven at speed through the housing estate. He suffered serious injuries and was taken to Tallaght Hospital where he was later pronounced dead.

It is understood a gathering had been taking place at the house in the hours before the incident and that the younger man was in attendance. A significant amount of alcohol had been consumed, sources said.

Mr Reilly was not at the party but arrived after he heard reports of a row breaking out there.

At this point gunshots were fired at the house, leading to a younger man, who had been inside, running to the van and attempting to drive off. Gardaí believe the van then hit Mr Reilly, possibly by accident.

A murder investigation has not been launched but sources said this may change depending on interviews with the suspect and the results of technical analysis of the scene.

A postmortem was carried out on Mr Reilly’s remains on Monday evening but the results have yet to be released.

“Right now the death appears to be accidental but that may change,” a source said.

The van was located a short distance away on Tymonville Drive with a flat tyre and damage to its bodywork. It has since been removed for forensic analysis.

The suspect was arrested shortly afterwards and taken to Tallaght Garda station where he remains. He can be questioned for a total of 24 hours.

Gardaí at Tallaght are appealing for witnesses and are particularly interested in a dark-coloured hatchback car that was seen leaving the area around this time.

They are also appealing for any road users who may have camera footage, including dash-cam footage, who were travelling in the Tymon Road North area late Sunday night or in the early hours of Monday morning.