Man in armed stand-off with gardaí dies of gunshot wound

Garda Ombudsman to investigate, though case regarded as “personal tragedy” 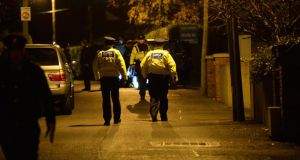 A man who shot himself during a stand-off incident with gardai in south Dublin yesterday afternoon has died from his injuries.

The case will be investigated by the Garda Siochana Ombudsman Commission.

The Garda complaints body conducts inquiries into all cases involving loss of life where the deceased had been in contact with the Garda at or around the time of death.

The dead man suffered a self inflicted gunshot wound to the head during an armed stand-off incident in Windy Arbour, Dundrum, south Dublin, yesterday afternoon.

He was taken by ambulance from the scene to St Vincent’s Hospital. It has now been confirmed he has died.

The case is being treated as a personal tragedy. Gardai have insisted that despite reports to the contrary, the man at no point during yesterday’s incident fired shots at members of the force.

The incident began when gardaí responded to reports of the incident after a house alarm was activated at an address in Farrenboley Park, Windy Arbour, yesterday just after lunchtime. On arrival at the scene, gardaí approached a stationary vehicle with a man inside who was armed with a shotgun, which he legally owned and had a licence for.

He appeared in an agitated state and gardaí made the decision to withdraw quickly due to the potential volatility of the situation and in the interest of public safety. Senior gardaí were dispatched to the area and the scene was assessed to try and determine if an armed reaction unit such as the Emergency Response Unit or Garda negotiators should be drafted in. However, the man shot himself.

The standoff lasted for almost three hours. One neighbour who did not give her name, said she had gone out to the shops and came home to find the street cordoned off.

“It’s a very quiet area; it’s like a little bit of country in the city.”

“I’ve never seen anything like this before,” another neighbour said.

Gardaí released a statement yesterday afternoon saying they were “dealing with an incident” outside the house involving a man in his 40s.

Several units of the Dublin fire brigade, paramedics and the Garda helicopter attended the scene and the man was taken away in the back of an ambulance which had backed into his driveway.