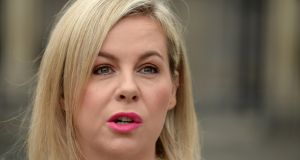 Further investigation by gardaí found many of the posters were of Lorraine Clifford-Lee, Fianna Fáil’s candidate in the Dublin Fingal byelection which takes place next Friday. File photograph: Dara Mac Dónaill/The Irish Times

A man found tampering with election posters in Balbriggan in north Co Dublin was arrested and detained by gardaí.

Gardaí were alerted after a member of the public reported seeing a man cutting down posters in the area earlier this week.

Further investigation by gardaí found up to 50 posters had been damaged. Many of them were of Lorraine Clifford Lee, Fianna Fáil’s candidate in the Dublin Fingal byelection which takes place next Friday.

Earlier this month Ms Clifford Lee apologised for tweets she posted in 2011 which were offensive to Travellers. However it is understood the man cutting down posters had no particular grievance with Ms Clifford Lee.

The cable ties on some other candidates posters in the constituency were also cut, including those of former Minister for Health Dr James Reilly (Fine Gael) and Duncan Smith (Labour).

Gardaí confirmed on Saturday that they are investigating an incident of criminal damage that occurred on the Naul Road, Balbriggan on the evening of Thursday November 21st last, following reports of a male cutting down election posters in the area.

“A male in his late 40s was arrested at the scene and was detained at Balbriggan Garda Station.

“He has since been charged and bailed to appear before Balbriggan District Court later this month,” gardaí said.