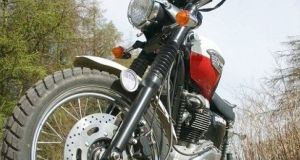 A 30-year-old man has been charged by gardaí after allegedly trying to obstruct gardaí from confiscating a mini-scrambler bike. File photograph: iStock

A 30-year-old man has been charged by gardaí after allegedly trying to obstruct gardaí from confiscating a mini-scrambler bike which was being driven by a 10-year-old boy in an erratic fashion in a public park in Cork.

Officers from Gurranabraher Garda station responded to a complaint from a member of the public that a mini-scrambler bike was being driven around a park off Sunvalley Drive in Fairhill at about 5.30pm on Thursday.

The mini-scrambler was being driven in an erratic fashion in the park, which is a popular walking spot for locals, and when gardaí stopped the bike, they discovered the driver was a 10-year-old, with another juvenile as a passenger.

It is an offence to drive a scrambler bike in a public place, and neither of the boys on the bike were wearing a helmet as required under law, so gardaí moved to confiscate the bike.

A man then attempted to intervene and stop gardaí from taking the bike, and he then tried to set the bike on fire. A suspect was subsequently arrested in relation to this incident for a public order offence.

Gardaí conveyed the suspect to Gurranabraher Garda station, where he was questioned for several hours before being charged and released on station bail to appear in court later. Officers also confiscated the mini-scrambler bike.