Although the AG or advisory board can make recommendations, decisions rest with cabinet 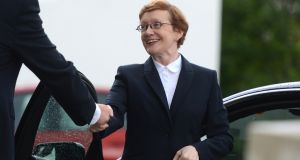 The nomination of former attorney general Máire Whelan to the Court of Appeal has brought the existing system for nominating judges into focus.

The Judicial Appointments Advisory Board was established to make recommendations to government about people who might be suitable for appointment as judges. It accepts applications from barristers and solicitors, which are then reviewed as to their suitability for positions that need to be filled.

In January, the advisory board posted an ad inviting applications for judicial positions in all of the courts. The closing date was January 26th, but the applications would be considered for any positions that arose in the course of the year.

Previously sitting judges who wanted to be promoted would make this aspiration known by way of informal lobbying, but when he was minister for justice, Alan Shatter, and Ms Whelan, put in place a structure whereby such expressions of interest should be notified to the attorney general’s office.

Both of these systems, one for the nomination of practising solicitors and barristers and one for the promotion of sitting judges, are confidential processes.

The membership of the advisory board includes the presidents of the five courts and others, and is chaired by the Chief Justice. The sitting AG is a member.

Fianna Fáil justice spokesman Jim O’Callaghan says this shows it was envisaged that an AG interested in becoming a judge would apply to the advisory board.

While it is the AG who receives expressions of interest from sitting judges, or canvasses sitting judges about whether they are interested in being promoted, the bringing to cabinet of recommendations as to who should be appointed a judge is a function of the minister for justice. This is usually done in consultation with the taoiseach and the AG.

While preparing recommendations, the minister will ask the advisory board if it has any suitable names for the envisaged appointment.

Under the Constitution, the government appoints judges. So all names submitted to cabinet, through the minister for justice, whether by way of the advisory board or by way of the AG, are in law only recommendations. The decision rests with the cabinet.

Independent minister Shane Ross, during the negotiations for the programme for government, secured a commitment to create a new system of judicial appointments.

The judiciary opposes the proposed new scheme, which will see an appointments board with a lay majority and a lay chair.

1 The view from Clondalkin: If Sinn Féin don’t get in, ‘there will be marches’
2 Coronavirus in Europe: Two dead in Italy as fears grow that attempts to contain illness are failing
3 Ryanair’s Michael O’Leary under fire for comments on Muslim men
4 Lithuanian man given until midnight on Saturday to leave Ireland
5 Founder of disabilities network with Irish centres sexually abused six women
Real news has value SUBSCRIBE