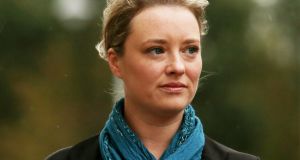 Alleged child abuse victim Máiría Cahill has received an apology from Sinn Féin leader Mary Lou McDonald after a report found failings in the way her allegations about an IRA member were handled. Photo: Brian Lawless/PA

Máiría Cahill has rejected an apology from Sinn Féin as “woefully inadequate” after Sinn Fein leader Mary Lou McDonald expressed regret for how it handled her allegation of rape.

Sinn Féin leader Mary Lou McDonald has “unreservedly” apologised to Máiría Cahill and praised her “bravery” after failings were identified into how allegations of sex abuse made by the SDLP councillor and two other women were handled.

Ms Cahill alleged to police in 2010 she had been raped by IRA member Martin Morris from 1997 to 1998, and said she was later subjected to an IRA “kangaroo court” investigation.

Three PSNI officers have been disciplined after failings were identified by a Police Ombudsman investigation into how allegations of sex abuse made by Ms Cahill and two other women were handled.

Ms McDonald said she deeply regrets the fact Sinn Féin did not have mandatory reporting procedures in place at the time Ms Cahill made her allegations.

“I want to commend their bravery, in particular the bravery of Máiría Cahill for waiving her anonymity,” Ms McDonald said in a statement.

“Sinn Féin has robust procedures in place for mandatory reporting of abuse. I deeply regret that these procedures were not in place at the time of Máiría Cahill’s disclosure. For this I unreservedly apologise. I wish Máiría Cahill every best wish for the future.”

She also welcomed the report from the Police Ombudsman “and the fact that the PSNI have accepted and will implement the recommendations of that report”.

Ms Cahill said on Twitter that she is not satisfied with Ms McDonald’s apology.

“The apology from MaryLou McDonald is woefully inadequate.

“It fails to : A) Admit IRA investigation; B) Admit SF cover up of abuse; C) Apologise for her and her party’s treatment of me in public.

“They told everyone that I was a liar. Now, let’s hear them admit I told the truth,” she wrote.

Ms Cahill is a former Irish Labour Senator, and a member of a prominent republican family.

The two other women also said they had been abused as children by Mr Morris.

In 2014, the trials of Mr Morris and of those accused of involvement in the IRA investigation collapsed when Ms Cahill and the other women withdrew their evidence, citing a loss of confidence in how the matter had been dealt with.

In 2015, a report by Keir Starmer – former chief of the Crown Prosecution Service, now a Labour MP – concluded it was “almost inevitable” that Ms Cahill and the two other alleged victims would decide to withdraw their evidence.

Following the publication of Mr Starmer’s independent review, the then director of the public prosecution service in the North, Barra McGrory, apologised to the women.

“We talked about how the RUC did not investigate intelligence that they held in 2000. This intelligence linked a man to the alleged abuse of children and also stated that the IRA was investigating this. We also discussed how the PSNI did not effectively investigate the allegations of three victims, one of whom was Máiría, from 2010. These shortcomings contributed to a failure in the prosecution and had massive negative impact on Máiría and the other victims,” he said.

“I was struck by Máiría’s courage and resilience. I was also struck by the fact that she shouldn’t have had to display that much resilience, had Máiría and the other victims been better supported by the Police Service and by the wider criminal justice system. We have all failed them and for that I once more apologise. The responsibility for the failing of these cases rest with the Criminal Justice system and not with Máiría a or any other victim,” he said in a statement .

Mr Hamilton said they discussed how investigators and prosecutors could more closely together to better support victims.

“Máiría and I agreed that this was the first of many conversations between her and the Police Service, as we seek to learn from our mistakes. I am keen to meet Máiría again to ensure that we improve these critical services to benefit all victims,” he said.

A statement from the North’s Ombudsman’s Office, on Wednesday, regarding how the PSNI handled the complaints, said it had been found that police failed those who were said to have been abused.

While he concluded that the PSNI investigation had failed the alleged victims, he did not support allegations that it chose not to arrest some of the individuals concerned because they were police informants, and that the case had been subject to political interference.

Dr Maguire was critical of the decision not to hold a serious case review and the circumstances of the police decision to split its investigation across two units: one dealing with victims of sexual assault, the other with experience in dealing with terrorist issues.

His investigation also did not support the claim that police inaction was such that Ms Cahill had to direct how the investigation progressed, but said its lack of a strategy for researching information already in the public domain contributed to her mounting concerns.

Dr Maguire made seven recommendations for changes to PSNI policies, and that four police officers be disciplined.

Three of the officers have been disciplined. The fourth has retired.