105 people seeking international protection were transferred to centre during pandemic 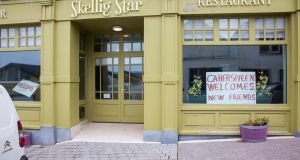 Welcome signs on the windows of the Skellig Star Hotel ahead of the arrival of the refugees. Photograph: Alan Landers

Legal proceedings are being taken by locals in Cahersiveen to shut down the direct provision centre to which 105 people seeking international protection were transferred during the pandemic.

The matter is to come before the Circuit Court in Tralee next week.

Ciaran Quinlan of Renard, Cahersiveen has instructed solicitor Padraig O’Connell to proceed to take an injunction against the operator of the centre at the Skellig Star Hotel, the solicitor has confirmed.

It is expected other individuals and business people in Cahersiveen will join in the proceedings, Mr O’Connell said.

Residents of the centre as well as local people have been campaigning to close it down. At least 25 people within the centre have now tested positive for Covid-19 since arriving in Cahersiveen.