Following UK reforms, Dublin may replace London as the defamation destination of choice 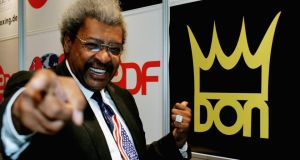 US boxing promoter Don King: sued a New York lawyer who had labelled him a bigot and an anti-Semite on two US-based websites. Photograph: Alexander Hassenstein/Bongart/Getty Images

Until recently London was hailed as the “libel capital of the common law world”. It was the jurisdiction of choice for defamation victims from the US and elsewhere seeking to sue in a legal forum that was considered plaintiff-friendly. By suing in the British courts the plaintiffs could avail of the UK’s notoriously strict defamation laws.

By contrast, American defamation victims have traditionally been reluctant to file suit in their homeland due to the difficulty in succeeding there. American defamation law has been developed in conformity with the First Amendment to the US Constitution, which protects free speech. Accordingly US law prioritises the exercise of free speech over a plaintiff’s reputational rights – particularly when dealing with public figures. Defamation plaintiffs therefore face an uphill battle to succeed before US courts. By way of response, wealthy American litigants in particular, but also others, have taken a now well-worn path to file suit in more plaintiff-friendly regimes such as the UK.

1 Bodies of mother and two children removed from south Dublin house
2 Aldi, Lidl bow to pressure to ban non-essential ‘middle aisle’ sales
3 Cork shootings: Gardaí believe older son was shot multiple times
4 Young homeless mother may have been dead in tent for a number of days
5 The real Contagion virus is out there and it’s causing virologists to worry
6 Mazda’s first EV requires mental recalibration
7 Cork shootings: Gardaí find lengthy apparent suicide note on one of the dead men
8 Man jailed for five years for killing 7ft 5in Belarusian man
9 ‘I actually didn’t know Ireland existed. But I read about it and knew it was perfect for me’
10 Kanturk farm shootings: A timeline
11 Mother of two sentenced to life in jail for murder of former husband
12 School closures on the agenda following ASTI vote
13 Medical gaslighting: The women not listened to or viewed as overdramatising or catastrophising
14 Second-level teachers vote for industrial action over school safety and pay
15 Michael Harding: Three reasons you’ll never see a cat in Donegal
16 In rural America, support for Donald Trump is complicated by the pandemic
17 Johnson’s Brexit Bill set to be blocked by House of Lords
18 No grand conspiracy to protect those responsible for mother and baby homes
19 Son (23) who died in suspected Cork murder-suicide was due to graduate
20 Six Nations - France v Ireland: Kick-off time, TV details, permutations, team news and more
21 Artist Tracey Emin reveals cancer diagnosis
22 Mother and Baby Home survivors can seek access to personal records
23 Newton Emerson: Money talks and waffle walks in Shared Island initiative
24 Ex-GAA player had up to €386,000 transferred to Dubai bank, court told
25 Johnny Ronan loses out on €315m Dublin docklands deal
26 ‘My boss gives me information that is misleading . . . I am obviously being bullied’
27 Bella Heathcote: ‘It was fun getting to be the Neighbours school b*tch’
28 Man jailed for role in ‘horrendous’ arson attack that left victim without ears
29 Coronavirus: Europe paying ‘high price’ for relaxing too quickly
30 The Irish Times view on Brexit talks: endgame in sight?
31 How Kim Kardashian West’s trip to a private island launched a thousand memes
32 Classic horror: the 10 most terrifying short stories ever written
33 How long can Government afford to keep State pension age at 66?
34 James Ryan leaves leading Lions talk alone for now as he relishes Paris return
35 Róisín Ingle: Five ways to find joy in a pandemic. Only one of them is illegal
36 Ryanair and Aer Lingus to cut further flights from regional airports
37 Dungarvan stripped of Waterford intermediate football title over Covid breach
38 Sinn Féin repays £30,000 given to ineligible NI offices in Covid-19 scheme
39 Tesco Ireland to take on 1,150 additional staff as online demand soars
40 Don McLean: 'American Pie is a biographical song'
Real news has value SUBSCRIBE