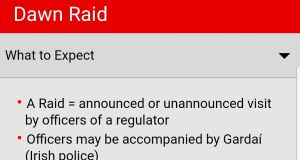 Matheson, one of the largest law firms in Ireland and one-time advisers to Anglo Irish Bank, has launched a phone app for companies worried about being raided in white-collar crime investigations.

The app, called Dawn Raid, advises companies how to prepare for a raid by the authorities and how to handle raids once they occur. It also includes contacts for a “rapid response team” in Matheson in the event of a raid.

The app advises clients to practise “mock raids” and to appoint staff to “shadow” investigators as they search their offices. A shadow must observe officers at all times and “seek to prevent disclosure of legally privileged records”, it states.

It also advises companies to set up “clean rooms” where officers should be asked to wait. Other advice includes not speculating when answering officers’ questions.

Matheson said investigators were increasingly willing to conduct dawn raids and “this trend may continue, as regulators’ resources increase and Brexit may mean that EU regulators will no longer dawn raid in the UK”.

Lawyers specialising in white-collar crime reacted with bemusement. One suggested the presence of the app on an accused’s phone could help the prosecution show they expected to be raided. A senior counsel said there was nothing legally wrong with pre-emptively advising clients how to deal with the lawbut it was a “peculiar message” for a law firm to send out.

Matheson said the app aimed to “educate and inform companies of best practice in facilitating the work of regulators” and that it reflected “an appetite from regulators themselves to have informed executives to help improve their engagement with companies they visit”.

It said “many companies that are not under suspicion or investigation can, as a third party, be subject to a visit by a regulator”. It said the app’s presence would indicate a company’s commitment to following international best practice.