Priority testing for gardaí no longer being pursued by Garda management, GRA says 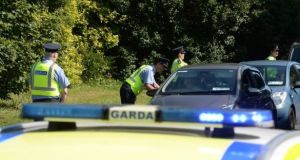 Significant numbers of Garda members have had to self-isolate because of Covid-19 and in one case an entire unit of gardaí in Dublin was forced to cease operations, the largest staff body in the force has said. Photograph: Dara Mac Dónaill The Irish Times

Significant numbers of Garda members have had to self-isolate because of Covid-19 and in one case an entire unit of gardaí in Dublin was forced to cease operations, the largest staff body in the force has said.

The Garda Representative Association (GRA), which represents about 12,000 rank and file gardaí, has expressed its dismay that priority Covid-19 testing for Garda members was no longer being pursued by Garda management. It believed a fast-track testing system for gardaí was urgently needed to ensure the resilience of the Garda force and to ensure its members did not contract the virus and spread it to people they encountered on duty.

The Association of Garda Sergeants and Inspectors (AGSI), which represents middle ranking Garda managers, said its 2,500 members felt “let down” by senior Garda management. Both associations had been pushing for priority Covid-19 testing to be extended to Garda members. It would have ensured any member of the force could have been tested and received a result under a fast-track system, negating the need for lengthy quarantining periods.

GRA president Jim Mulligan said his association had been informed by senior Garda management plans to introduce priority testing were being abandoned for now because of “clinical governance issues” within the HSE.

He called on National Public Health Emergency Team (NPHET) to “broaden their understanding” of managing this health crisis. “Policing is central to containing the spread of the virus yet they appear not to recognise this,” Mr Mulligan said, adding the GRA had been assured “week after week” priority testing would be put in place for Garda members.

Sampling facilities had been organised in different parts of the country and Garda members with medical experience had been trained to take samples for testing only for the plan to be abandoned. “It is difficult to make sense of how there could be a governance issue around priority testing for gardaí when there was none around other frontline workers such as medical staff and ambulance workers,” Mr Mulligan said.

“During this crisis, we have seen 45 gardaí go into self-isolation in one division, and a whole unit was stood down in Dublin recently – albeit temporarily. We have also seen 52 cases in which gardaí were the target of people weaponising Covid-19,” he added of spitting and coughing directed at gardaí. General secretary of AGSI, Antoinette Cunningham, said her association was informed on Wednesday during a teleconference with Garda management they were “not progressing the matter of priority testing for members of AGSI at this time”.

She described the move as U-turn on previously stated plans, saying her association had been surprised and disappointment by it. “We had already informed our members that priority testing would be available. AGSI supports priority testing for our members to ensure capacity in the force at all times and have asked Garda management to review this decision,” she said.

In reply to queries Garda Headquarters, Phoenix Park, Dublin, said the health authorities had maintained a list of people or defined groups that were categorised as priority groups for testing. The list had been in the public domain but was discontinued on Wednesday “as it appears that there is now more than adequate testing capacity across the public health system to meet demand” for all testing required through the population.