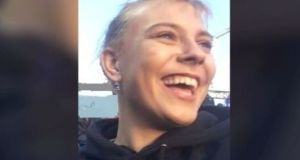 Boy B told the court he left Ana Kreigel and Boy A and was walking away when he heard the scream.

A boy accused of the murder of 14-year-old Ana Kriégel told gardaí in his fifth and final interview after his arrest that he heard Ana scream from an abandoned house where her body was later found.

During ten hours of interview, the accused, Boy B, gave gardaí varying versions of his movements before Ana’s murder.

He had initially told gardaí he called to Ana’s house on behalf of his co-accused, Boy A. He said he walked with her to a location in nearby St Catherine’s Park where they met Boy A. He said he left Boy A and Ana a short time later and didn’t see them again.

In interview four, which was conducted on the second day of his detention in Finglas Garda Station, Boy B admitted to gardaí he had “lied” and made up a “fake story” about where he and Ana first met Boy A in the park.

In interview five, gardaí put it to the boy they had a witness who saw a youth walking through a field towards the abandoned house. “I believe that was you going into the field,” Detective Garda Donal Daly said.

Det Gda Daly told the boy: “You’re making this up as you go along [BOY B], I have to say. I’m presenting facts and evidence to you and you’re changing your story to suit. You can’t keep doing this.”

At that point Boy B asked his mother to leave the interview room. Det Gda Daly told him, because he was only 13, his mother had to remain.

“You owe it to everyone to start telling the truth here. You owe it to your mam, to yourself, to tell the truth because unfortunately a girl has been brutally murdered.”

Boy B’s solicitor Barry Powderly suggested they take a break but Det Gda Daly said they were at a crucial stage.

“The truth that’s all we want,” he told the boy.

Boy B said: “Me, [BOY A]and Ana, we went through the fields and [BOY A]brought her to the house. I didn’t go in the house. I just went with [BOY A]because I thought he wanted to go somewhere private. Then I left.”

He said Boy A went into the house with Ana. “I left and that’s when I heard the scream and then I ran.”

He continued: “I ran, I went to the tap and I had a little drink, sat down and then I started walking. And then I went home. I didn’t go in the house. I was just tagging along.”

“So [BOY A]and Ana were in the house when you ran away?” the detective asked.

“Yea, I was walking away when I heard the scream.”

The detective asked the boy for more detail. “I know its hard but you have to.”

Boy B broke down crying and said: “It was a really strong scream. I could hear if from outside the house and just when the scream was about to end it got muffled.”

“Who did you hear scream?” the detective asked.

The detective told him: “I know this is hard. Tell me absolutely everything. Take your mind back to that moment when you’re in that field. Where exactly were you when you heard that scream?”

The boy identified a spot halfway between the house and a bush.

“It was a really strong scream. I knew that it was Ana but since [BOY A]was there she’d be fine. He’d protect her. The scream was like really loud. Just before it ended it got muffled, like someone covered her mouth.”

Boy B continued: “I ran home. I thought everything would be alright. [BOY A]would protect her.”

Det Gda Daly then agreed to pause the interview and take a break for 30 minutes.

The trial at the Central Criminal continues on Thursday when the jury of eight men and four women will watch the rest of interview five.

It is the prosecution case that Boy B lured Ana from her home at 5pm on May 14th, 2018 on the pretence of meeting Boy A, who Ana was “interested” in. Boy A then allegedly violently sexually assaulted and murdered her in the derelict farmhouse as Boy B watched.