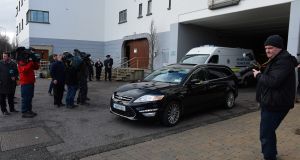 A hearse carrying the body of a baby boy who died at the Park Place apartment complex in Killarney on Sunday leaves the scene for Kerry General Hospital. Photograph: Domnick Walsh/Eye Focus. 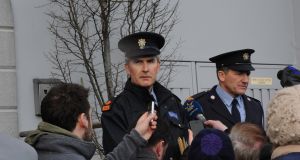 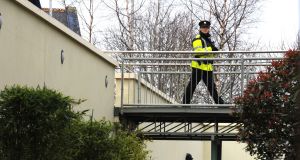 A garda is photographed at the scene where a child was found dead at the Park Place apartments in Killarney, Co Kerry on Sunday. Photograph: Domnick Walsh/Eye Focus.

The results of a postmortem will determine the course of the Garda investigation into the death of an 11-month old baby boy in an apartment in Killarney town centre on Sunday, the officer leading the inquiry has said.

The chaplain to the large Polish community in Killarney, Fr Piotr Delimat, said it had been very affected by the tragedy. However, the community was well organised and people would support each other and the family, he said.

Supt Flor Murphy said the body of the child was discovered in a bedroom of an apartment in the Park Place scheme off High Street, Killarney at about 6 pm on Sunday when gardaí went to the scene.

Gardai described the infant’s death as “sudden and unexplained”.

A man in the apartment with “serious injuries” was taken to Kerry University Hospital in Tralee and is still receiving treatment.

The infant’s body, which remained overnight in the apartment, was removed to Kerry University Hospital for a postmortem.

Supt Murphy said gardaí were appealing to anyone who was in the Park Place complex between 1pm and 6pm on Sunday, or anyone with any information whatsoever, to contact them.

Both of the infant’s parents work in a hotel just outside Killarney. It is understood the mother, who is a chef aged in her 20s, alerted the emergency services after returning home from work at about 6 pm.

The injured man taken to hospital from the apartment is her partner and the father of the dead child. He is aged in his 30s.

Killarney, with its active tourism and services industries, has traditionally been one of the most popular destinations in Ireland for Polish people, who accounted for 1,320 of the total population of more than 14,000, according to the 2011 census.

Family members and friends and neighbours in the apartment scheme, as well as the child’s mother, were interviewed by gardaí on Monday as part of their inquiries. They are waiting for the father to be well enough to be interviewed.

Gardaí stressed that they were keeping an open mind about what might have happened.

Fr Delimat, the Polish chaplain in Kerry who is seconded from the Archdiocese of Krackow, said he was liaising with the family involved and would continue to do so.

Many of the Polish families in the town have children and were very touched by the tragedy, he said. He would be keeping in contact with the family and the community would be supportive of them, he felt.

One Polish woman living in the apartment complex said Sunday had been a very quiet day in the complex. Everyone was very shocked by the news of what had happened.

It is understood the couple had been living in the apartment for some months.