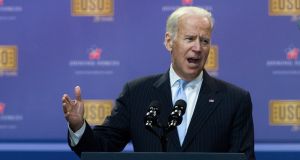 US vice president Joe Biden is set to include a visit to Cooley Peninsula in Co Louth as part of his trip to Ireland. Photograph: Drew Angerer/Getty Images

The visit to Ireland of US vice president Joe Biden next month is set to cost at least €5 million for the Garda and Defence Forces operation and will involve over 2,000 personnel.

Dublin’s Phoenix Park will be in lock-down for four days as Mr Biden is set to stay at the US Ambassador’s residence there.

The decision not to stay in a hotel while in Dublin follows criticism in the US of the 2013 visit to Ireland by Michelle Obama and her daughters which cost the US taxpayer $7.6 million.

Ms Obama, who was accompanied by her daughters, stayed in a $3,300 (€3,000) per night suite at the Shelbourne Hotel on St Stephen’s Green.

As well as staying in the Phoenix Park, Mr Biden is due to visit the Cooley Peninsula in Co Louth which will necessitate a major security operation on both sides of the border, planning for which is already well underway.

The national road cycling championships due to take place on the last weekend in June in the Phoenix Park has been called off, with the Garda citing a major security operation.

The Irish Times understands that operation relates to the visit of Mr Biden.

The Garda has also told Cycling Ireland, which governs the sport across the island of Ireland, that the security operation set to take place across Dublin will involve so many gardaí that the bicycle races cannot he held anywhere else in the city or county.

The scrapping of the cycling races, which look set to move to Co Wicklow, offers the first indication of the extent of the security to be put in place for Mr Biden.

“Obviously Obama is the No 1 in terms of the security but the vice president and the first lady visits would not be very far behind,” said one source.

Mr Biden will visit Ireland from June 21st to 26th for official talks and to deliver a speech on the Irish-American history, the shared heritage between the two countries and the need for tolerance and inclusiveness around the globe.

He is expected to meet Taoiseach Enda Kenny and Irish President Michael D. Higgins in Dublin and travel to Louth and Mayo to trace his family roots through his maternal ancestors, the Finnegans and the Blewitts who emigrated to the US in the 19th century.

The visit will coincide with Britain’s referendum on whether to exit the European Union on June 23rd.

US President Barack Obama publicly pushed Britain to remain in the EU during his visit to the UK last month raising expectations about whether Mr Biden, who regularly comments on foreign policy matters, might echo Mr Obama’s sentiments with similar remarks on his visit to Ireland in the lead-up to the referendum.

The fact that Mr Biden is to travel close to the border and right across the country will necessitate a very significant security operation, outside of simply keeping secure the buildings he visits.

The routes he takes around the country will need to be kept safe from any threats, which can be a very significant and expensive undertaking.

The Army was expected to deploy troops to patrol Phoenix Park to shore up security around the US Ambassador’s residence, although the US secret service is responsible for Mr Biden’s close security detail.

Troops equipped with night vision surveillance equipment were expected to patrol the Phoenix Park through the nights Mr Biden is in Ireland.

Garda outriders will escort Mr Biden’s entourage around the country, with the Garda helicopter above along with fixed wing surveillance aircraft and armed Air Corps helicopters.

A no-fly zone will apply. Surface to air missiles will be at the ready.

The locations Mr Biden will visit will be thoroughly checked for explosives and any other security risks by a range of gardaí including the Garda Water Unit, which will check the sewer systems and also any bodies of water close to where Mr Biden will visit.

A large milk churn bomb was found on the island of a small lake in the Phoenix Park in April 2012. Gardaí believed at the time it had been moved there in panic because dissident republicans feared it would be found and linked to them during a major Garda crack-down at the time.

In the event of anti-US protests during the Biden visit, the Garda will have the Public Order Unit and the Garda Dog Unit as well as water cannon.