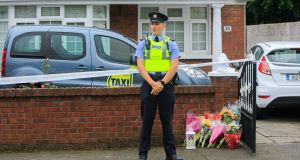 Gardaí investigating the murder of 57-year-old mother-of-two Jean Eagers in her Dublin home at the weekend were on Tuesday night still waiting to interview the chief suspect in the case.

The man, who is aged 60 and was known to the dead woman, was arrested on Sunday morning at the crime scene, immediately after the killing came to light.

However, when he was taken into custody he had sustained a number of injuries necessitating medical treatment.

As a result, his questioning was suspended and he was taken to Connolly Hospital in Blanchardstown.

He has remained, undergoing medical treatment since being taken to hospital early on Sunday afternoon and gardaí are awaiting clearance from medical staff to begin interrogating him.

The suspect was detained under Section 4 of the Criminal Justice which allows for him to be questioned for up to 24 hours without charge once his interrogation resumes.

It is understood the suspect’s injuries were self-inflicted.

A number of weapons, including a Samurai sword and meat cleaver, were taken from the house when the murder occurred as gardaí suspect they were used during the killing.

Ms Eagers was found dead in her home on Willow Wood Grove, Hartstown, west Dublin, at about 11.30am on Sunday.

A young man, aged around 20 years, was in the house at the time and is believed to have witnessed the attack on Ms Eagers or its aftermath before running to a nearby house to raise the alarm.

When gardaí arrived at the scene the suspect was inside and refused to come out, with gardaí forcing their way into the house and arresting him.

Paramedics tried to resuscitate Ms Eagers but she was pronounced dead at the scene.

The victim and the suspected killer were well known to each other for decades and gardaí are not looking for anyone else in relation to the murder.

She had lived for many years at the house where she was murdered.