David Walsh (29) from Co Wexford, dies after sustaining stab wound to his neck 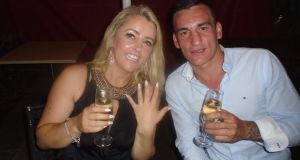 Irish man David Walsh who has been fatally stabbed in Sydney is seen with his fiancee Tina Cahill shortly after they got engaged. Photograph: Facebook 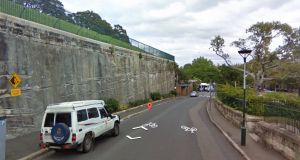 An Irish man has been stabbed to death on Watson Road (above) in Sydney, Australia. File photograph: Google Street View

A 26-year-old Irish woman charged with the stabbing murder of her Irish fiance in Sydney on Friday has not applied for bail.

Catherina (also known as Tina) Cahill, who has been charged with the murder of 29-year-old Daithy Ian Walsh at their home in Sydney, did not apply for bail at Parramatta Local Court on Sunday.

Ms Cahill chose not to appear via video link and will next appear before Burwood Local Court on Wednesday.

Mr Walsh, a father-of-three from Enniscorthy, Co Wexford, was found with a stab wound to his neck after police were called to an altercation involving a number of people at a house on Watson Road, Padstow, in the city at 12.15am on Friday (1.15pm Irish time).

He was treated by paramedics but pronounced dead at the scene.

After the stabbing Ms Cahill, originally from New Ross, Co Wexford, was arrested and questioned along with another man, a 36-year-old Australian from Revesby in Sydney.

Ms Cahill was later charged with murder. She and Mr Walsh had become engaged last month.

The man arrested and questioned at Bankstown Police Station in the city was released without charge.

In a statement New South Wales Police said their detectives were being assisted by officers from the State Crime Command’s Homicide Squad.

The New South Wales Police said it was also working with the Irish Consulate in Sydney.

The Department of Foreign Affairs said it was aware of the case but unaware of any request to date for consular assistance by family on either side of the incident.

Tributes were paid to Mr Walsh in Enniscorthy on Saturday where his death was greeted with shock.

Local Councillor John O’Rourke remembers a headstrong young man with a great interest in sports, who was known to his friends as “Motcha”.

“I coached him under 12s for Ajax soccer team here in the town,” said Cllr O’Rourke. “The news has come as a massive shock to everyone here.

“He comes from a family that would be well-respected within the local community. He was a decent chap and anytime we met he would always have a word for you and he’d reminisce about the all the good times on the pitch when he was playing.”

Cllr O’Rourke said the 29-year-old leaves behind three young daughters in Enniscorthy. Mr Walsh was involved in the building trade and worked in carpentry. He moved to Australia around 2012 and had got engaged to Ms Cahill on New Year’s Eve.

Cllr O’Rourke said: “It’s a sad time for the town and for his family and out thoughts and prayers are with them at this difficult time.”