Woman (64) was guest at Connemara Lake Hotel in Oughterard 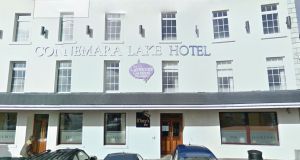 The Connemara Lake Hotel was evacuated shortly after her death and a forensic examination of the scene was being carried out on Tuesday. Photograph: Google Street View

Gardaí have begun an investigation into the death of a 64-year-old woman woman at a hotel in Oughterard, Co Galway on Monday.

The woman who is understood to be from Co Cork had been staying at the hotel as a guest for the weekend.

The Connemara Lake Hotel was evacuated shortly after her death and a forensic examination of the scene was being carried out on Tuesday.

A spokeswoman for the gardaí said thebody of the deceased was located in a bedroom at the hotel on Monday at about 11.30am. A statement on the hotel’s website on Tuesday confirmed that the hotel was closed until further notice until after a garda investigation had taken place.

“The Connemara Lake Hotel confirms that a guest tragically passed away while staying in the Hotel over the weekend.

“Our thoughts and prayers are with the deceased, their family and friends,” it read.

It is understood that two other guests from the hotel presented at the emergency department in University Hospital Galway feeling unwell and have undergone tests.

Gardaí have said the investigation is ongoing.