Inside Court 12: the complete story of the Belfast rape trial 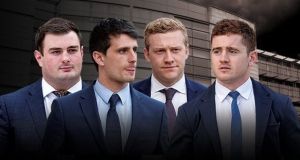 After 42 days, 30 witnesses, two snow storms, one Six Nations and three hours and 40 minutes of jury deliberations, the accused were acquitted on all counts. The following is a full account of what happened in the court room during this time.

The large dock in Court 12 at Laganside is not designed for this type of trial. With 21 seats, including one for a security officer, it is more suited for the types of cases which used to be much more common in Northern Ireland – mass trials of paramilitary members. It was ideally suited to the 2011 trial of 14 suspected loyalist paramilitaries on a litany of charges in the so-called “Supergrass trial”.