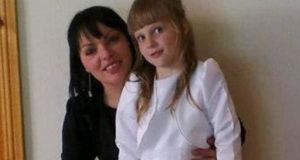 Jolanta Lubiene (27) and her eight-year-old daughter Enrika Lubyte were found dead in the home they shared at 9 Langford Downs, Killorglin, Co Kerry, on June 17th, 2013.

The jury at the inquests into the deaths of a mother and her young daughter in Kerry almost four years ago has returned a verdict of unlawful killing.

Jolanta Lubiene (27) and her eight-year-old daughter Enrika Lubyte were found dead in the home they shared at 9 Langford Downs, Killorglin, Co Kerry, on June 17th, 2013. The pair had been due to return home to Lithuania for good later that summer.

Ms Lubiene’s sister, Kristina Kuleviciene, said the inquests into the deaths of her sister and niece had brought finality for the family. Asked if her opinion of the man convicted of their murder had changed, she replied: “He is still a monster.”

The husband and father of the deceased, Marius Lubys, described his daughter as “the best little girl”.

A jury returned a verdict of unlawful killing in accordance with the findings of the postmortems. Lithuanian national Aurimas Andruska is serving two concurrent life sentences for the murders. An appeal by him to overturn his convictions was unsuccessful.

Jolanta Lubiene and her daughter Enrika were found dead in the home they shared by Ramute Narmute, who raised the alarm. Ms Lubiene had received at least 61 stab wounds to the thorax, abdomen, neck, arms, legs and back in a “sustained and violent sharp weapon attack”.

Dr Margot Bolster’s postmortem of Enrika revealed she had received 11 stab wounds and some superficial wounds. Both died from haemorrghage and shock due to multiple wounds.

Ms Narmute told the inquest she became concerned when Ms Lubiene had not returned any of her texts or calls. When she called to the house she could see “blood on the stairs and the body on the floor . . . I thought it was a man at first, but then I saw the black hair and I knew it was Jolanta,” she said.

Garda Eamon Prenderville told the inquest he saw a woman’s body on the kitchen floor. He said there was a lot of blood staining and he found Enrika on the landing.

Joan O’Neill, who worked with Jolanta at St Joseph’s Nursing Home, was the last to see her alive. She gave her a lift into town when they finished work at 1.30pm on Saturday. Neighbour Mark O’Sullivan was the last to see Enrika alive, cycling on her bicycle on the estate at 9.30am Saturday.

The deposition of Det Insp Fearghall Patwell said Andreas Andruska was identified through a profile of his DNA that was found on Enrika’s top. A fingerprint in Ms Lubiene’s blood found on the wall of the stairs matched a sample given voluntarily by him to gardaí.

He was convicted of the double murder in November 2014.