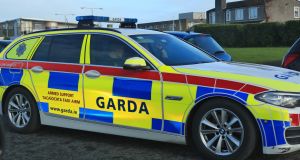 Garda representative groups have called on the Commissioner to retain the hoods for the safety of their members. file photograph: Collins

Forty six gardaí have been spit on by suspects in the two months since the Garda stopped releasing regular updates on such incidents.

New figures also show gardaí are continuing to use spit-hoods on suspects. The hoods- which are placed over the entire head of violent suspects- have been used on 19 people in the last two months.

In total there have been 167 “spitting assaults” on gardaí since the force started keeping track of incidents on April 8th, near the start of the Covid-19 pandemic.

Spit-hoods, which were first brought into use at the start of April, have been used 101 times, according to figures released to the Irish Times.

The figures show, that while spitting incidents and spit-hood use has declined significantly since the height of the pandemic, they are still occurring on a weekly basis.

An average of just under six spitting incidents a week have occurred in the eight weeks since the start of July. During that same period gardaí have used spit hoods an average of 2.3 times a week.

In April, Garda Commissioner Drew Harris said the hoods, which the Garda calls “anti-spit-guards”, were being introduced as an emergency measure in response to spitting incidents on officers and that their continued use would be reviewed in September.

This review has started and “will be completed this month and will be released in due course”, a Garda spokeswoman said.

The use of spit-hoods has been criticised by human rights groups here and abroad. The Policing Authority, which oversees the Garda, has also raised concern about the devices and said their use should end on November 8th when much of the emergency Covid-19 legislation is due to expire.

In July, the Garda told the Policing Authority the hoods are used for twenty minutes or less in 85 per cent of cases. However in one case a suspect was left in a hood for five hours.

The Irish Council for Civil Liberties (ICCL) said this week the hoods are “barbaric” and ineffective at stopping the spread of Covid-19. It also objected to the use of the term “anti-spit guard” which it said implied the devices were a form of PPE instead of a hood place over a person’s head by force.

The use of spit-hoods is under renewed scrutiny in the US following news of the death of a mentally-ill black man during his arrest by police in New York. Daniel Prude died of suffocation after police put a spit-hood on him and pinned him to the ground.

“The death of Daniel Prude after he was hooded by US police highlights just how dangerous-  lethal in fact -  spit-hoods really are. It also underlines how their use on people in a state of mental distress can aggravate a situation, endangering the lives of people on the streets as well as police,” ICCL Director Liam Herrick said.

“We are extremely concerned that spit hoods were used 101 times, including once on a child, up to 31 August. We call on the Garda Commissioner to withdraw this potentially lethal piece of kit immediately.”

Garda representative groups have called on the Commissioner to retain the hoods for the safety of their members. In its submission to the ongoing review the Garda Representative Association (GRA) said: “Our members have rights, too,” it said.