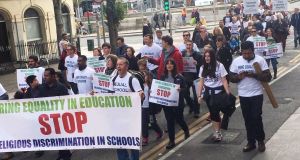 Up to 200 parents marched through Dublin city centre on Sunday to call for an end to “religious discrimination” over access to the education system. Photograph: Carl O’Brien/The Irish Times

Hundreds of parents marched through Dublin city centre on Sunday to call on the State to end religious discrimination against children over access to primary and secondary schools.

The protest was organised on social media by Roopesh Panicker, a member of the Hindu community, following his struggle to find a school place for his four year old daughter Eva at a local Catholic school in south Dublin.

The demonstration attracted up to 200 parents and supporters, many of whom have not baptised their children and are worried about securing school places for them.

Mr Panicker said the march, from Leinster House to the Department of Education on Marlborough Street, was aimed at putting pressure on authorities to ensure there is equal access to school for all children.

“We are not anti-religion. We just want to take religion out of the school. We should make sure our taxpayer-funded schools are for everyone,” Mr Panicker said.

“We’ve had a huge response. This is one of those known, hidden facts. Until now, no one has campaigned around this. But it’s changing fast.”

More than 90 per cent of State-funded primary schools remain under Catholic Church patronage, despite concern from the United Nations and other organisations over the lack of non-denominational schools in Ireland.

An attempt by the former minister for education Ruairí Quinn to increase the number of non-denominational schools resulted in the transfer of three schools – one Catholic and two Protestant – to non-religious patrons out of 3,200 primary schools nationwide.

Nikki Murphy from Terenure said she had to delay sending her four year on son Reuben (4) to school this year, despite applying to nine schools.

“He’s not baptised. Both myself and my husband were brought up in Catholic families, but haven’t practiced since we were teens.

“It’s very upsetting. We want him to go to school locally with his friends. But it makes me feel angry to see that he’s listed as a category four, nine or even 11 because of local enrolment policies.”

Under the Equal Status Act, denominational schools may favour the enrolment of certain students on the basis of religion.

Paddy Monahan, a barrister and father of a seven-month old boy, said he believed State-endorsed “religious discrimination” to be unconstitutional.

“There is no defensible constitutional basis for this. The law which permits discrimination clearly breach article 44.2. of the Irish constitution, which says ‘the State shall not impose any disabilities or make any discrimination on the ground of religious profession, belief or status’.”

Rory and Kim Goodbody from Dún Laoghaire also said they were worried about finding a place for their son, Josh, who has not been baptised.

“The multi-denominational schools locally are over-subscribed. We had his name down on the list for the local school since before he was six months old, but he’s over number 100 on a list which takes 50 students a year,” said Mr Goodbody.

He said he and his wife were baptised into the Church of Ireland and Church of England, respectively, but neither were practising.

“People say ‘why don’t you just baptise him?’ But it would be insulting and disrespectful to other beliefs and to promise to bring him up in a religion which we won’t practice.”

Andrew Howley, a father of three from Harold’s Cross, said the number of children not being baptised was on the rise, but many parents felt frozen out of the education system.

“We have the kids down for six schools, because they don’t have chance of getting into at least four of them, by the time relatives, family members and baptised children are taken into account,” he said.

“You fill out the forms for the local Catholic schools, but you realise your children are down towards the very end of the list.”

1 Woman stranded in Ireland due to pandemic has ‘miracle baby’
2 Covid-19: Critical cases from NI could put pressure on services in Republic
3 Covid-19: Public urged to ‘stay at home’ as 1,025 further cases confirmed in State
4 Transmission of Covid-19 on flight into Ireland linked to 59 infections
5 US election: ‘Donald Trump needs to go. White America got what they want’
Real news has value SUBSCRIBE