Members of the Association of Garda Sergeants and Inspectors marched to Government buildings to protest pay and conditions. 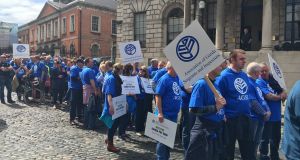 Several hundred senior gardaí marched to Government Buildings on Tuesday in a protest over stalled progress on the restoration of their pay to 2008 levels.

Members of the Association of Garda Sergeants and Inspectors, dressed not in uniform but wearing blue t-shirts, marched from Dublin Castle to highlight what they say is a lack of engagement by the Government in dealing with their pay issue.

The large group gathered near Dublin Castle from 11am and traffic came to a standstill about an hour later as they walked in near silence down Dame Street, up Suffolk Street and continuing down Nassau Street and up Merrion Street to Government Buildings.

They were briefly addressed by the organisation’s general secretary John Jacob and its president Antoinette Cunningham, who handed in a letter for the attention of Tánaiste and Minister for Justice Frances Fitzgerald.

“I think Government need to sit up and take notice of the 650 people that have taken to the streets today in protest at Garda pay negotiations,” Ms Cunningham said.

She said she appreciated the support and solidarity of the members and their families on the march, as well as their Garda Representative Association colleagues and retired members who also joined them.

“We will continue this long and sustained campaign as long as it takes to get meaningful negotiation around pay,” Ms Cunningham said.

Paul McDermott of the AGSI executive said members had rejected the Lansdowne Road agreement last November because the then government had not abided by the terms of the previous Haddington Road deal.

“We brought in all the new practices they wanted on the transformation agenda. Everything was done. We have engaged with the two chairmen – one covering pay and one covering structures and the chairman covering pay resigned from it last week. We’re not sure why. We have not delayed this process at all.”

“If we can get into meaningful talks we will be constructive and we want to see a pathway to having our money restored. Obviously it’s going to be over a period of time. But through negotiation and not through emergency financial legislation and threats. Basically it’s intimidatory – you sign up to this deal or we freeze your pay.”

Mr McDermott said the mid-ranking roles in the force had “a lot of responsibilities”.

“We are under supervision ourselves. And we have all the different structures such as GSOC and inspectorates looking at us over our shoulders. Our members are doing an awful lot they haven’t done before.”

Separately, uniformed gardaí were policing an anti-water charges protest outside Leinster House on Kildare Street. The AGSI protest did not come into contact with that event and the members dispersed down Merrion Street shortly after 1pm.

Sgt Donal Smyth, who is stationed in Navan, Co Meath, and who has been in the force for 34 years, said he was opposing the financial emergency measures being imposed on members from July 1st.

“We have nowhere else to go. You can’t really impose a new agreement on people where the original one is not completed yet.

“I’m in a lucky position that I’m 9 to 5, but the people on the shifts are really struggling out there and it’s not only that, it’s the extra responsibilities on Garda sergeants. The transformation agenda is coming down the line since Croke Park. We have complied with everything and it’s come to the point now that we are really struggling.”

He said there were 15 new probationer gardaí in his area earning €23,000 per annum.

“I see them coming to try and get accommodation in Navan and things are so difficult. I remember when I joined the job back in 1982 and it’s now 34 years later and we are now back to the same situation we were in when we started back then.”

Sgt Smyth said he was lucky to be at the “tail end” as two of his boys were in college and one was working.

“But I remember going back to 1991 where our job sold out the pensionability of some allowances that we sold on some young people. It’s not going to happen again – it’s unfair.”

He said 275 new sergeants who had been newly promoted this year would be on the same salaries for two years from July 1st without increments.

“I’m a former member of the executive and the last term and have been a member of AGSI for 23 years.

“We could be accused of being irresponsible or blocking up Dublin town, but we are actually being responsible and we’d ask the government to be the same.

“It’s no longer one for Garda management – the game has moved on. But it’s sad to see on a nice day in the middle of May passing Trinity College you have mid-ranking gardaí who basically are out to be responsible towards our younger people - the people who have been asked to go forward for promotion but won’t receive an increment.

“It’s a misnomer as well that people will say the guards are looking for a pay increase. “We’re not; they promised to give it back and now it’s time to start. We are not looking for the full 25 per cent and I’m not speaking on behalf of the executive but we need to have something meaningful.”

“We hope that it will bring home to Government what is happening in An Garda Síochána. ”

“We are coming towards the end game and we need to be listened to like a lot of other groups in the country. We will do it peacefully and quietly and with dignity and we will stick together for as long as this takes. And we’ll be back here again and again.”

Mr O’Hara, a retired member, said he did not agree with how gardaí were being deployed, particularly with regard to policing Irish Water installations.

“I think that’s radically wrong and again we have always had the support of the vast majority of the community at large.”

“We are not there for any special cause. We are there to serve the community. And I think we have done under very difficult circumstances and with totally inadequate resources, I think we do a bloody good job.

“I lost very close to 29 per cent of my pension. That drove all kinds of things wrong. How could you budget for something like that?”