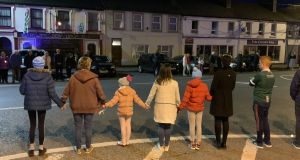 Hundreds gathered in the centre of Charlestown, Co Mayo on late on Friday night , for the arrival home home of the cortège of Detective Garda Colm Horkan. Photograph: Ellen O’Riordan

Hundreds gathered in the centre of Charlestown, Co Mayo late on Friday, to welcome home the cortège of Detective Garda Colm Horkan.

The 49-year-old garda who was shot dead in Castlerea, Co Roscommon, late on Wednesday night will lie in repose at the family funeral home in Charlestown on Saturday afternoon.

Although serving in Castlerea, in neighbouring Co Roscommon, locals told of how he was immersed in his hometown, was a key figure in the local GAA and part of a much-loved and respected family.

Horkan’s childhood friend and a sergeant at Swinford Garda station, Declan Casey, led the cortège on his service motorcycle, while teams of players from Charlestown Sarsfield GAA, where Horkan was a long-time member, followed the hearse carrying candles as it made its way through the town shortly before midnight on Friday.

The body had travelled through Ballaghadereen, where Horkan served until recently, and was brought to an undertakers in Curry, just over the border of Co Sligo, before making its final journey to Charlestown.

Local auctioneer Brendan Kenny told how the Det Gda Horkan was reared above the Dew Drop Inn in the centre of the town. The pub was originally owned by his father Marty before it was sold a number of years ago.

“God almighty the whole thing is terrible. Colm was such a gentleman and he was the rock of that family,” Mr Kenny said.

Pharmacist Nuala O’Donnell Johnson grew up just a few doors down from Colm Horkan, who she described as a “gentle giant” and a “man of the town”.

“He certainly lived his life to the full. He would have been at every dog fight, GAA match and race meeting, and he was always immaculately dressed and always with a smile,” she said.

She said the 49-year-old “struck everybody” he met and, although he was not married, she said he had plenty of admirers.

“It is just so sad. Colm was the nicest, gentlest guy and a huge character in the town,” she added.

A close friend to Marty Horkan, Cllr Murray spoke of the devastation felt throughout the town for a neighbour who has buried his wife, his daughter and now will lay to rest his son.

“The last thing a parent wants is to bury an offspring. How do you come to terms with that?” he asked. Marty Horkan’s grief is deeply felt throughout a community that is now “totally subdued, numb”, Cllr Murray said.

“Everybody is just devastated with the situation. You don’t expect this in rural towns west of the Shannon. They might not be as vibrant as you would like but at least they are peaceful,” he said.

The funeral of Detective Gda Horkan, will take place on Sunday in Co Mayo.

Det Gda Horkin’s remains will be removed from the family home on Sunday morning to arrive at St James’s Church, Charlestown, Co Mayo for concelebrated funeral Mass at 12 noon, followed by burial in the adjoining cemetery.

Mourners will follow social distancing guidelines as per HSE guidelines.

The national flag will be flown at half-mast as a mark of respect to Det Gda Horkan. One minute’s silence will be observed at Garda Headquarters and at all Garda Stations around the country where current and past members of an Garda Síochána are invited to attend.

At each Garda station, the station party will parade in front of the station and will be brought to attention at 12 o’clock to observe a minute’s silence.

The funeral will be live-streamed at mcnmedia.tv/camera/charlestown.