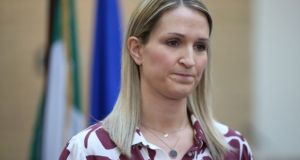 Tánaiste Leo Varadkar said Minister for Justice Helen McEntee had not specifically mentioned any of the three other judges who had expressed an interest. File photograph: Nick Bradshaw/The Irish Times

Following days of pressure from the opposition, the Minister for Justice Helen McEntee relented and agreed to answer questions in the Dáil on the appointment of Mr Justice Séamus Woulfe to the Supreme Court whenever TDs wish.

In a letter to the Ceann Comhairle sent on Thursday evening, she said she would reschedule her next parliamentary questions on a date to be agreed by TDs.

Ms McEntee wrote: “As Minister for Justice, it is my duty to respect the independence of the judiciary, a cornerstone of our State and system of government.

“I and the Government have grave concerns that the manner of Dáil debate being proposed by the Opposition on judicial appointments could generate inappropriate comment around serving judges on the floor of the House.

“The concerns as outlined by the Taoiseach and the Tánaiste this week are shared across Government.”

However, she said she was also conscious of the responsibility of ministers to be accountable to the Dáil.

“Deputies can table parliamentary questions and oral questions to me and Government colleagues on numerous issues,” she said.

“I would ask the business committee to reschedule my next session of oral ministerial questions, currently due to take place on December 15th, to a date that meets the satisfaction of members.”

She said the process of oral questions would ensure that members can raise concerns across numerous issues “within the parameters of normal parliamentary procedures”.

“This is a completely spurious suggestion from the Minister and changes nothing. It’s laughable. She has no choice but to answer her normal PQs,” he said.

“She must still come before the Dáil next week and take specific questions on the Supreme Court appointment process. Otherwise she is refusing to fulfil her constitutional role and that will have to be considered by the Dáil.”

Sinn Féin party whip Pádraig Mac Lochlainn said: “This is further evasion from the Government. A full statement by the minister and questions and answers is required. The Government know this.

“They are still circling the wagons and deliberately obstructing the work of the opposition. They refuse to be accountable on this issue. This is unacceptable.”

Earlier, Taoiseach Micheál Martin had indicated the Coalition may discontinue the practice of judicial appointments being discussed by the most senior figures in government before a person is nominated to the Cabinet.

Ms McEntee’s concession comes after days of stonewalling from Government in the face of demands from the opposition for her to answer questions in the Dáil on the issue, and is a sign that the controversy over the appointment is refusing to go away.

Earlier yesterday, opposition leaders said they would not relent in demanding Ms McEntee answer questions in the Dáil about Mr Woulfe’s appointment.

A week after The Irish Times reported that three sitting judges had expressed an interest in the Supreme Court role, the three largest Opposition parties all focused on the judge’s appointment during Leaders’ Questions in the Dáil on Thursday, with Tánaiste Leo Varadkar facing robust questioning on his knowledge of the events that led to Mr Woulfe’s appointment.

Sinn Féin leader Mary Lou McDonald told parliamentary colleagues later on Thursday afternoon she would refuse to allow the Government to “sit the controversy out”.

“They are very much mistaken if they think this is going away; and it’s not just Sinn Féin saying that - the Opposition are united on this.”