Harris must listen to survivors of loyalist violence – Sinn Féin 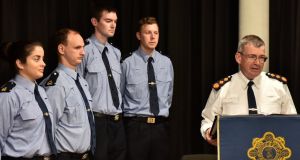 New Garda Commissioner Drew Harris needs to respond to survivors and relatives of terrorist atrocities who believe there was collusion between loyalists and the RUC, Sinn Féin leader Mary Lou McDonald has said.

Sinn Féin has backed the appointment of Mr Harris – a former RUC officer and, until this year, deputy chief constable of the Police Service of Northern Ireland – as new commissioner, but Ms McDonald said the needs of victims and survivors of loyalist attacks needed to be listened to.

“It is not a case of us trying to rain on anybody’s parade,” she said. “We want to be constructive, want policing to work North and South. Public confidence is at the core of this. The needs and feelings of victims and survivors need to be taken into account.”

Ms McDonald referred to the Miami Showband massacre, the Dublin and Monaghan bombings and the Loughinisland killings, all of which involved allegations of collusion between the loyalist groups and Northern Ireland’s security forces, specifically the RUC.

Campaigners such as the Miami Showband attack survivor Stephen Travers have said the PSNI has refused to release files that might point to collusion.

The appointment of Mr Harris, who is the first external candidate to lead the Garda, has been criticised because of his past links to British intelligence services while holding senior policing roles in Northern Ireland and his part in rejecting an independent investigation into the loyalist “Glenanne Gang” that has been blamed for scores of killings in the 1970s and 1980s.

Last month the High Court rejected a challenge against Mr Harris’s appointment taken by Belfast-based researcher Ciaran MacAirt whose grandmother, Kathleen Irvine, was one of 15 people killed in a loyalist bombing of a Belfast bar in 1971.

Minister for Justice Charlie Flanagan rejected criticism of Mr Harris’s appointment, saying that much of the opposition was “political motivated” and some was driven by “sectarian prejudice”.

Mr Flanagan made the comments after he unveiled a plaque in memory of Garda Michael Clerkin, who was killed by an IRA booby-trap bomb while on duty at Garryhinch on the Laois/Offaly border in October 1976.

The Minister, whom Mr Harris will report to in his new role, pointed out that there was an open competition for the job from both outside and within the State. There were almost 90 applicants and it was an independent process involving the Policing Authority and the Public Appointment Service, he said.

“I am satisfied that the best candidate is in position,” he said.

Policing Authority chairwoman Josephine Feehily said that Mr Harris possessed “the skills, expertise and experience” to be commissioner to address the “many existing and emerging challenges” and “exploit the opportunities” that will come from the current period of growth and reform the Garda is facing.

Ms Feehily rejected any suggestion that there was a conflict of interest in the appointment and said she had no concerns about the new commissioner dealing with security and intelligence matters.

Among the issues the association wants addressed by Mr Harris are low morale, training, resources and protected disclosures

“I wonder is there a conflict that’s any different from the duty of confidence, in law, that other professionals have to a client,” she told RTÉ’s Morning Ireland.

“This happens globally, all over the world, without these issues causing the same consternation. I’m sure the commissioner will address these issues.”

Garda representative groups welcomed Mr Harris’s appointment, noting the policing experience that he brings to the role at a critical juncture for the Garda as it faces changes following years of controversy.

The Garda Representative Association, which represents more than 12,000 rank-and-file and mid-ranking gardaí, urged Mr Harris to stand up to politicians and to be more open in dealings with Government.

Among the issues the association wants addressed by Mr Harris are low morale, training, resources and protected disclosures.

Antoinette Cunningham, general secretary of the Association of Garda Sergeants and Inspectors (AGSI), said she wants the new commissioner to maintain open communications with staff organisations and to commit to a new community policing module.

She said the new commissioner’s biggest challenge will be with the publication of the Commission on the Future of Policing in Ireland in just over a fortnight’s time.